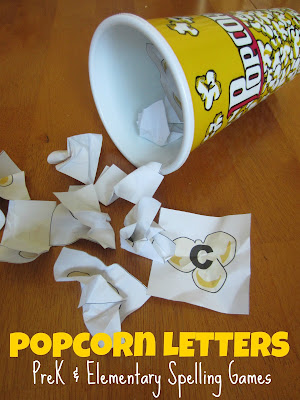 I've been working hard to feed our boys healthier snacks and lately, there's no snack requested more than popcorn. I even whipped up some tasty cinnamon-glazed popcorn this weekend (MMMMmmm).

So when I saw Mrs. Jones's popcorn words, I was excited.

Instead of word work, though, I thought we could do some spelling practice.

I made an alphabet of letters on popcorn pieces.

I printed four sets of the popcorn alphabet, cut apart the letters, and grabbed a few popcorn buckets.

Now it was time for both of my boys to play!


LEARNING THE LETTERS IN MY NAME Popcorn Game (PreK)
For my just-turned-four-year-old son, learning the letters in his name has been a struggle. I've been itching to find ways to help make this fun. I took a piece of 8 1/2 by 11-inch office paper and cut it the long way, taping the short ends together so I had one long strip of paper.

Then, I wrote the letters in his name leaving a generous amount of space between each. Now, I grabbed only the popcorn letters that make up his name, wadded them up a little, and tossed them into a popcorn cup. 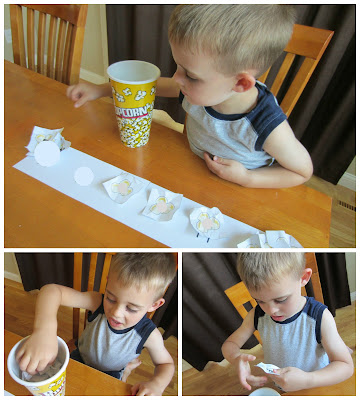 It was his job to pull them out, say each letter out loud (he repeated after me), and match the popcorn's letter with the letter in his name, placing the popcorn letters in piles on top of the handwritten name banner I made. He really enjoyed this game and the two books we read to go along with it as well.

SPELLING PRACTICE Popcorn Game (Elementary)
My oldest son toted home his first spelling list this week (the 2nd week of 3rd grade). While the list is shockingly easy compared to last year (they're implementing a new literacy program), I wanted him to get in the habit of studying spelling. The popcorn letters were the perfect spelling manipulative.

For his activity, I used a BIG popcorn bowl we had on hand and all the letters from four sets of the popcorn alphabet.

I wrote a handful of the words in his notebook and told him to pull the pieces out, trying to find the letters to spell each of the words. 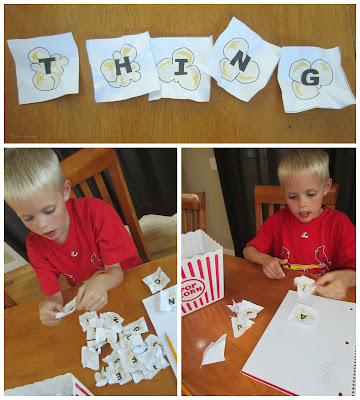 Each word got a score - the number of extra popcorn letters that were pulled out before the entire word was spelled. One word only had 15, another 62! My son had fun counting and recording each word's score.

When he was done, we read The Popcorn Book. WOWZERS, there sure is a lot to learn about popcorn!

Posted by Deceptively Educational at 7:47 AM