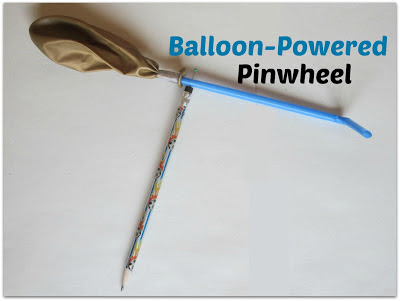 Have you seen this phenomenal idea on Pinterest? It's from the NASA Teacher's Resource Center. In case that didn't convince you that it was awesome, allow me to try.

My oldest son was in a funk and promptly informed me that he did not want to do an activity when he got home from summer camp. But that was before I pulled out the supplies and set them in front of him:

Curiosity won out and his bad case of the grumps vanished.

First he blew up the balloon to stretch it out. Then he put the straw (the end opposite the bend) into the neck of the deflated balloon. We used scotch tape to secure it in place. 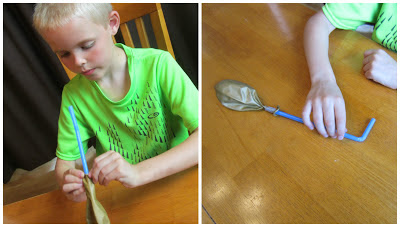 Now he held out his finger to figure out where the balance point was with the balloon-ended straw on it. This was the place where the sewing pin was inserted. 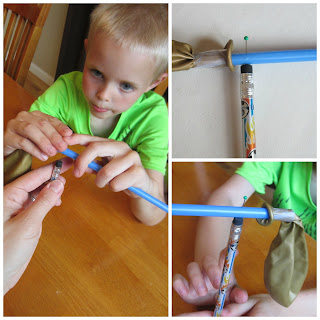 We pushed it down through both sides of the straw and into the pencil's eraser. Then we spun it around a few times to loosen up the hole a bit. 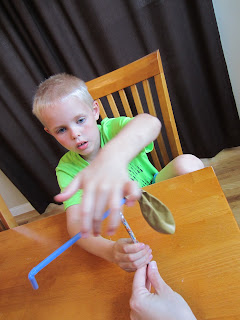 My son was still stumped. I told him to put the bent end of the straw into his mouth and blow up the balloon. Then release it and watch what happens.

Around and around the straw spun on its axis. And again and again, he blew up the balloon to watch it. He was fascinated!

This isn't the first time we've used balloons to propel something. (Check out our squid!)
Posted by Deceptively Educational at 7:47 AM