Under Construction (a Greater-Than Less-Than Game) 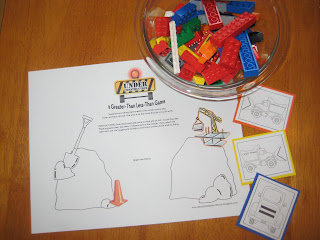 Rather than just doing drills to practice greater than and less than with two numbers, I thought I’d make a little construction game for my son. I was pretty sure that using LEGOs would add just the fun my son would need to be enticed to play learn. I was right.

I made three cards: two of a front-end loader whose scoop formed the < and > signs, and a truck whose grill made the =. (Download the cards I made here.) Then I created a game mat with two piles of dirt and space in the middle where one of the cards would be placed. 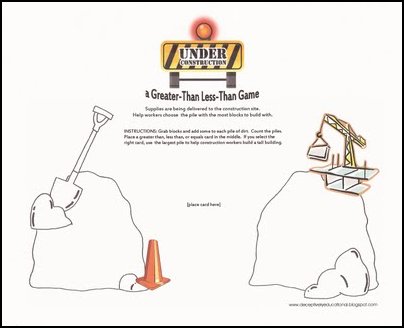 All that was left to do was grab a small bowl of LEGOs. Before my son played, I explained that some workers needed help constructing a building. Building blocks were being delivered to the construction site.

It was up to him to determine which pile of LEGO blocks was bigger; place the greater-than, less-than, or equal card in the middle; and if he added the correct card to the game mat, he could use the biggest pile of blocks to build with. If the piles were equal and he added the pick-up truck card, he could use both.

I explained that the front-end loader only wanted to pick up the biggest pile, so its scoop should be facing towards the largest number of blocks.
After tallying each pile and placing a card, I had him write the equation in his notebook. Then he could get building. He completed about a dozen problems. The last round of play, there were three LEGOs on one pile and none on the other. 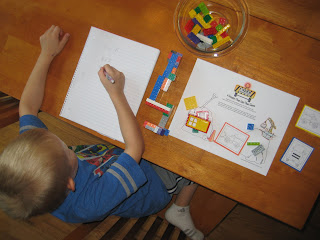 My son LOVED this. When it was done he said, “Finally, you made an activity with LEGOs!” If only I’d thought of this sooner …


Check out other great math ideas and activities at Love2Learn2Day's Math Monday Blog Hop!
Posted by Deceptively Educational at 7:10 AM