If I Was A Constellation 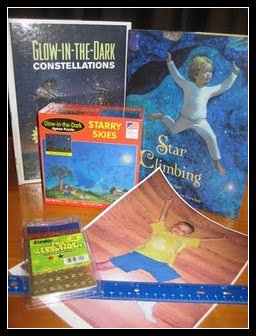 There’s something fascinating about the night sky. To help my son see more than just a sky full of “twinkle, twinkle little stars,” I checked out some great books on stars from our local library. First, we read Star Climbing, a fiction book by Lou Fancher. This dreamy book talks about a child who falls asleep imagining what it’s like to play among some of the most popular constellations.

When done, I opened Jessica Dowling’s Glow-in-the-Dark Constellations book to the page showing late summer star formations like Hercules, the Little Dipper, and Cygnus the Swan. We headed into a window-less room to see just what exactly these stars would look like in our night sky.

Finally, I handed my son a full-page photo that I’d snapped of him sprawled out on the floor the day before. I gave him another piece of plain white paper and told him it was time to turn himself into a constellation; he was intrigued.

Because we don’t have a light table, he put the plain paper atop the photo, paper clipped the two, and taped them to a window. Since the photo was printed on regular (i.e. thin) office paper, the sunlight shone through enough for him to make out his picture through the white paper covering it. 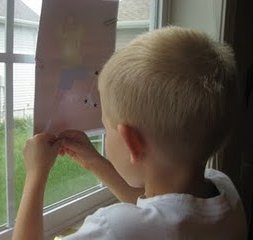 Like the constellations in Dowling’s book, he added star stickers to the main points on his body. Then we removed the tape and he used a ruler to draw a straight edge connecting the stars. The final result was awesome! 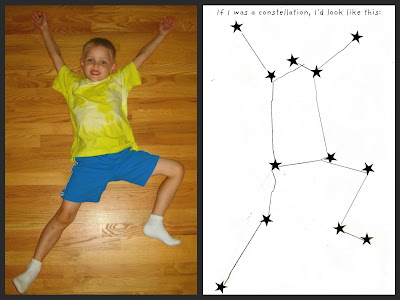 To wrap up our night sky-inspired activity, I gave my son a 100+ piece puzzle picturing constellations that glowed-in-the-dark. (I snagged this at Tuesday Morning for just $1.99!!) We love doing puzzles together!
Posted by Deceptively Educational at 7:12 AM