Fireflies in a Jar (Glow-in-the-Dark Addition) 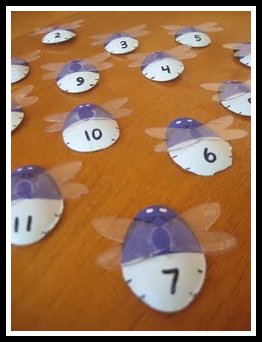 With more than a dozen plaster beetle shapes left over from our Friend vs. Foe Beetle Tic-Tac-Toe activity, I was determined to put them to use. Having bought some glow-in-the-dark acrylic paint for another activity, I channelled my inner Picasso to make 13 fireflies. I had saved the excess plastic laminate cut from the Nature Scavenger Hunt cards; On it I drew wings with a fine-tip Sharpie, cut them out, and super-glued them to the back of each firefly.

On their glowing lanterns, I used a permanent black marker to write the following numbers:
2, 3, 4, 5, 6, 7, 7, 8, 9, 9, 10, 11, and 12. My husband cut me two, 2-inch wood cubes to use as dice. I painted these with the same glow-in-the-dark paint. For the dots, I printed a large black rectangle on sticker paper and used a paper-punch to make tiny circular stickers which I stuck on each side.

Lastly, I printed a jar shape on sticker paper and cut out the center. I measured the outside dimensions of a quart-sized freezer sandwich bag and cut the sticker paper slightly smaller. I peeled the backing and stuck it to the bag. Of course, you could use a real Mason jar but since I didn’t have one, I improvised. To download the jar graphic, click here.

How to Play
The game is simple. And so clever. And so not my idea. I have to give credit where credit is due. This activity was inspired by Little Miss Kindergarten’s “Roll the Dice” printables (download them here).

To play, I had my son roll the two dice, add the numbers together, “catch” the firefly wearing that number, and put it in the jar (um … I mean bag). The point was to see how many fireflies my son could catch before the light from the paint faded (and, truthfully, to test my son’s addition in the dark when he wouldn’t be able to count on his fingers). 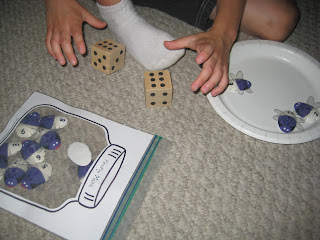 As you can imagine, capturing pictures of the game in the dark was impossible. The one you see here is lit by a flash and doesn't do justice to how fun (or cute) this activity was. My son loved it and did so much better adding in the dark than I’d imagined (Woo Hoo!).

Did you know fireflies are beetles? We didn’t. But we do now!

Like the game, NOT the craft?
The glowing insects are not necessary and DIY insects aren’t either. To simplify this activity, just buy one of those tubes filled with plastic bugs, stick number stickers on their backs and give your child two dice and a jar. Voila! It’s time to catch some bugs!

Posted by Deceptively Educational at 7:06 AM