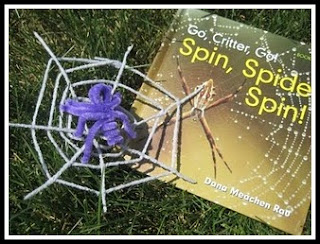 It’s late summer and the spiders are out in full force. To learn a little about these amazing eight-legged creepy crawlies, I hit the library and checked out Dana Meachen Rau’s Spin, Spider, Spin. This simple non-fiction book was a breeze for my son to read and taught us some interesting facts about arachnids (did you know they have eight legs AND eight eyes?!? YIKES!). After my son finished the book, I told him that it was time to spin his web.

I gathered the following supplies:
Old bulletin board (a few plies of corrugated cardboard would suffice)
Push pins
White school glue
Yarn
Waxed paper
Print-out of a spider web (I used this one.)
2 Pipecleaners

I put the spiderweb print-out underneath a sheet of waxed paper on top of the bulletin board and told my son to add push pins wherever the lines intersected, but not push them down all the way. 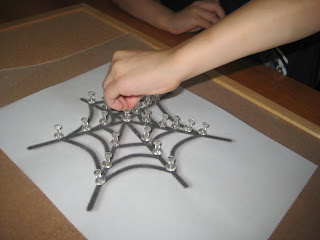 Then I watered down some white school glue and dipped the yarn in it. Then he wound the sticky yarn around the pins in spiral. Lastly, we added straight pieces of gluey yarn radiating out from the center. Then we waited. And waited. And waited. 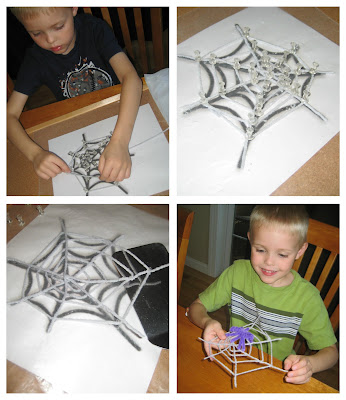 The next morning, I removed the pins and used an aluminum grill spatula to gently detach the (now stiff) yarn from the waxed paper. Our web was complete!

Later that day, my son made a spider to go with his web out of two pipecleaners (I helped a little). We followed this amazing YouTube tutorial.

Now I have spiders outside and (one) inside the house, too!
Posted by Deceptively Educational at 12:58 PM