There's been a lot of paper crafting at my house lately, thanks to my oldest son's obsession with Tom Angleberger's Origami Yoda book series. While we're at the kitchen table folding up the whole cast of Star Wars, I thought I'd work in a few other crafts - namely paper flyers.

My oldest boy loves a good DIY toy. (He gets that from me.) 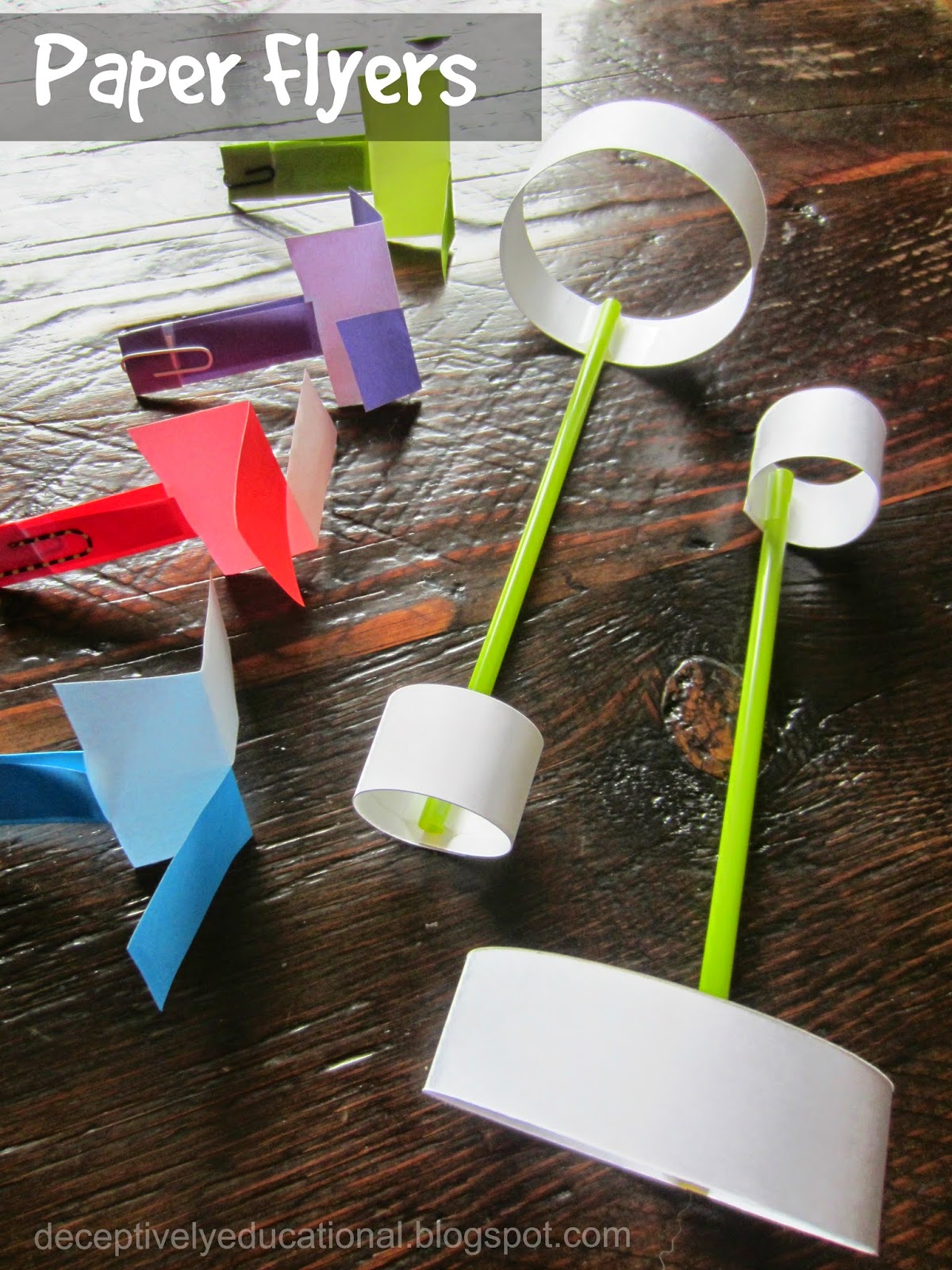 Flying Paper Whirligig
As a kid I used to pick up sycamore seeds and throw them into the air to make them spin back down to the ground. These whirligigs remind me of those seeds. 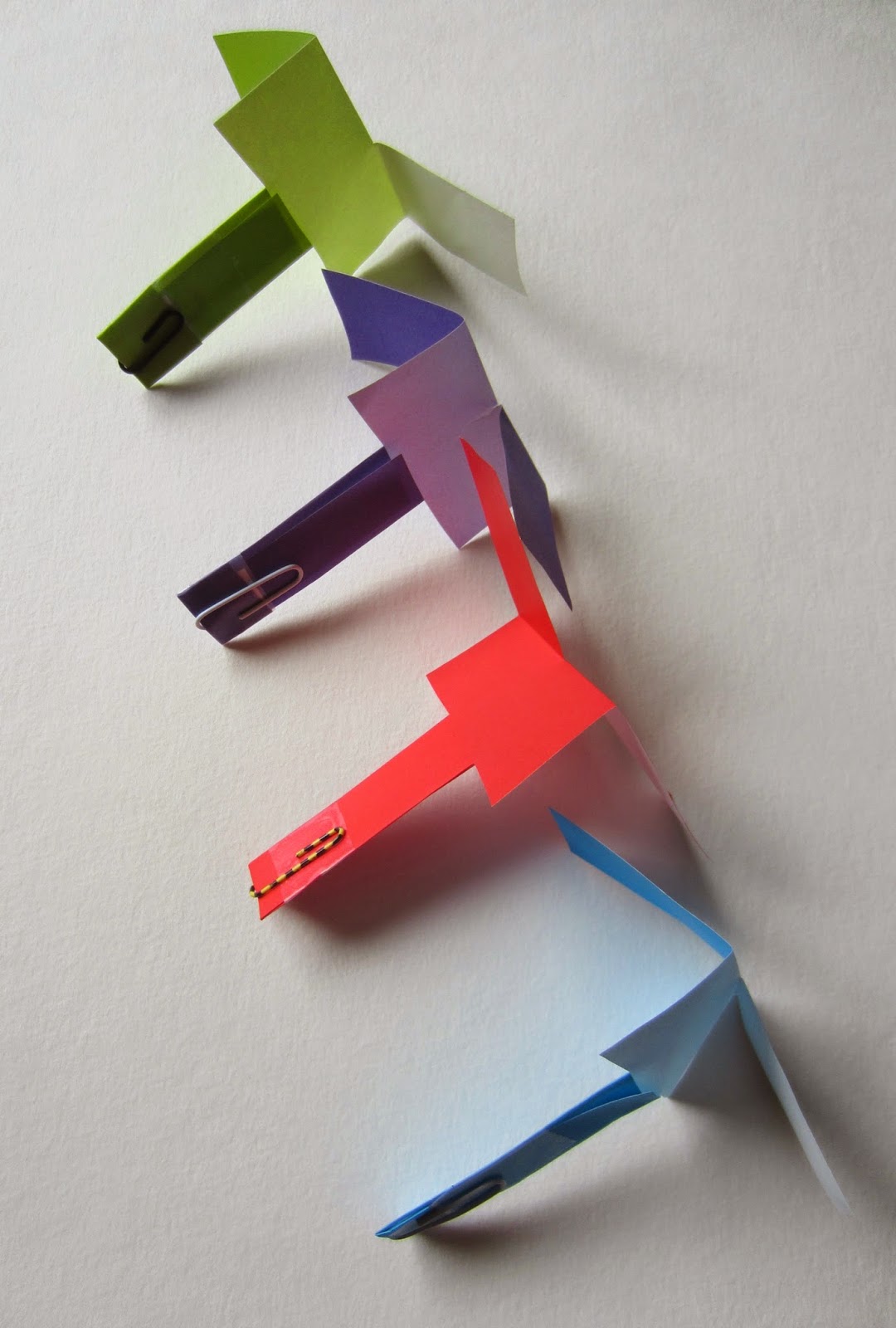 Making them is simple. Don't let the instructions fool you.

Start with a long rectangular piece of paper about 2 inches by 6 inches; we used origami paper but plain 'ol office paper will do. Draw your lines (dotted and solid like the picture below).

You will cut on the solid lines and fold on the dotted lines.

Fold the paper in on the two long dotted lines to make a handle for what now looks like a small spade of paper. Fold the end of the handle up and adhere with a small piece of tape. Slide a small paper clip (as a weight) over the folded and taped end.

Next fold one side of the spade shovel down along the dotted line. Flip the paper over and do the same to the other side, so your whirligig's blades are pointing in opposite directions. You're done! 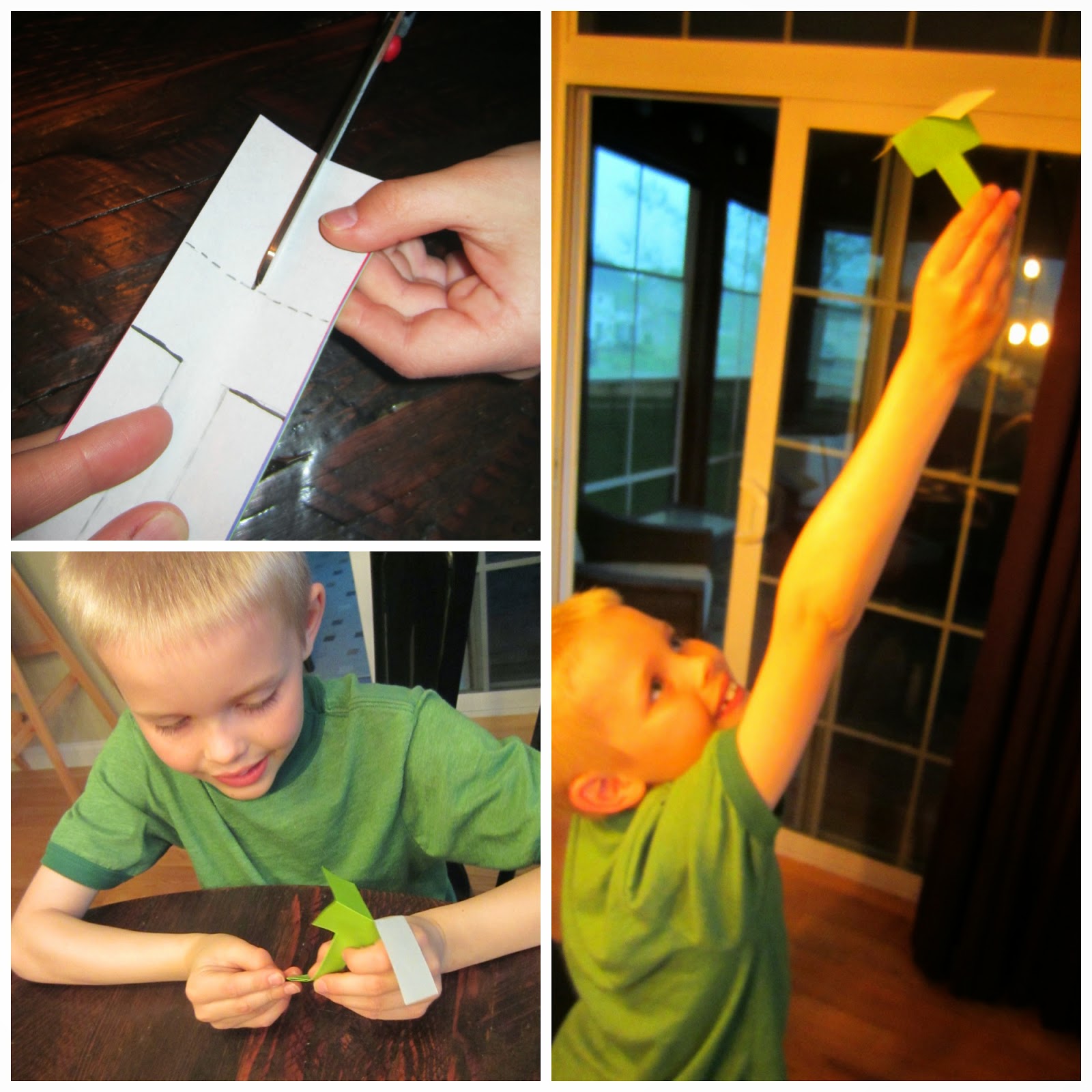 Hold the whirligig in the air and drop it. Watch it gracefully spin to the ground (and if you're like my son, drop it over the stair railing to see it spin for a greater distance).

This idea came from Babble Dabble Do. She's got a great photo tutorial so head over there if you're stumped.

Straw Plane
This next craft is a must-do for paper airplane aficionados. It looks nothing like a plane, but boy oh boy, does it glide through the air with streamlined precision. Impressive is an understatement. 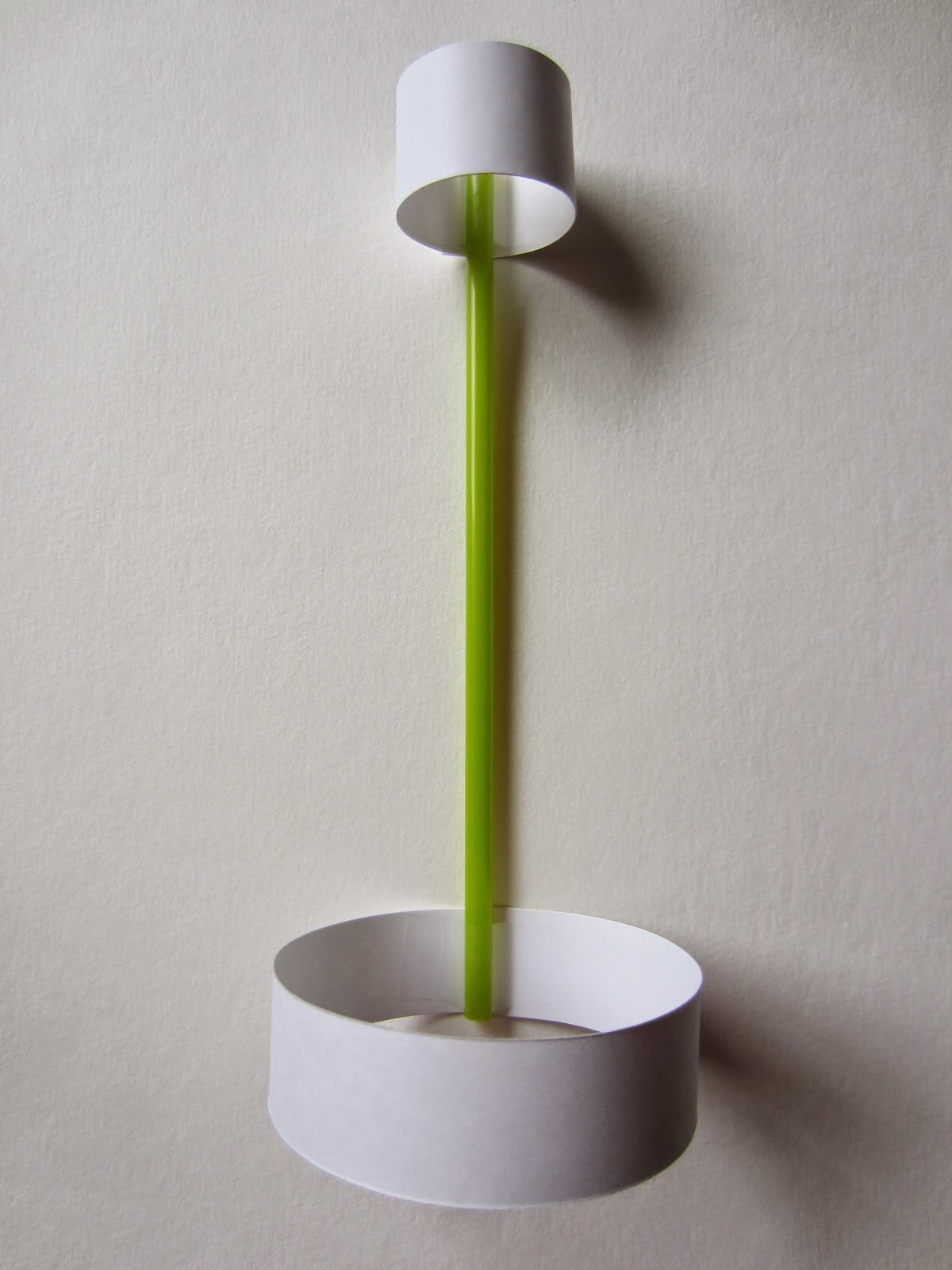 Cut two strips of cardstock paper, one 1 inch by 10 inches, and the other 1 inch by 5 inches. Tape them into two circle shapes.

Now take a plastic drinking straw and adhere each with more tape to the  ends of the straw. You're done! 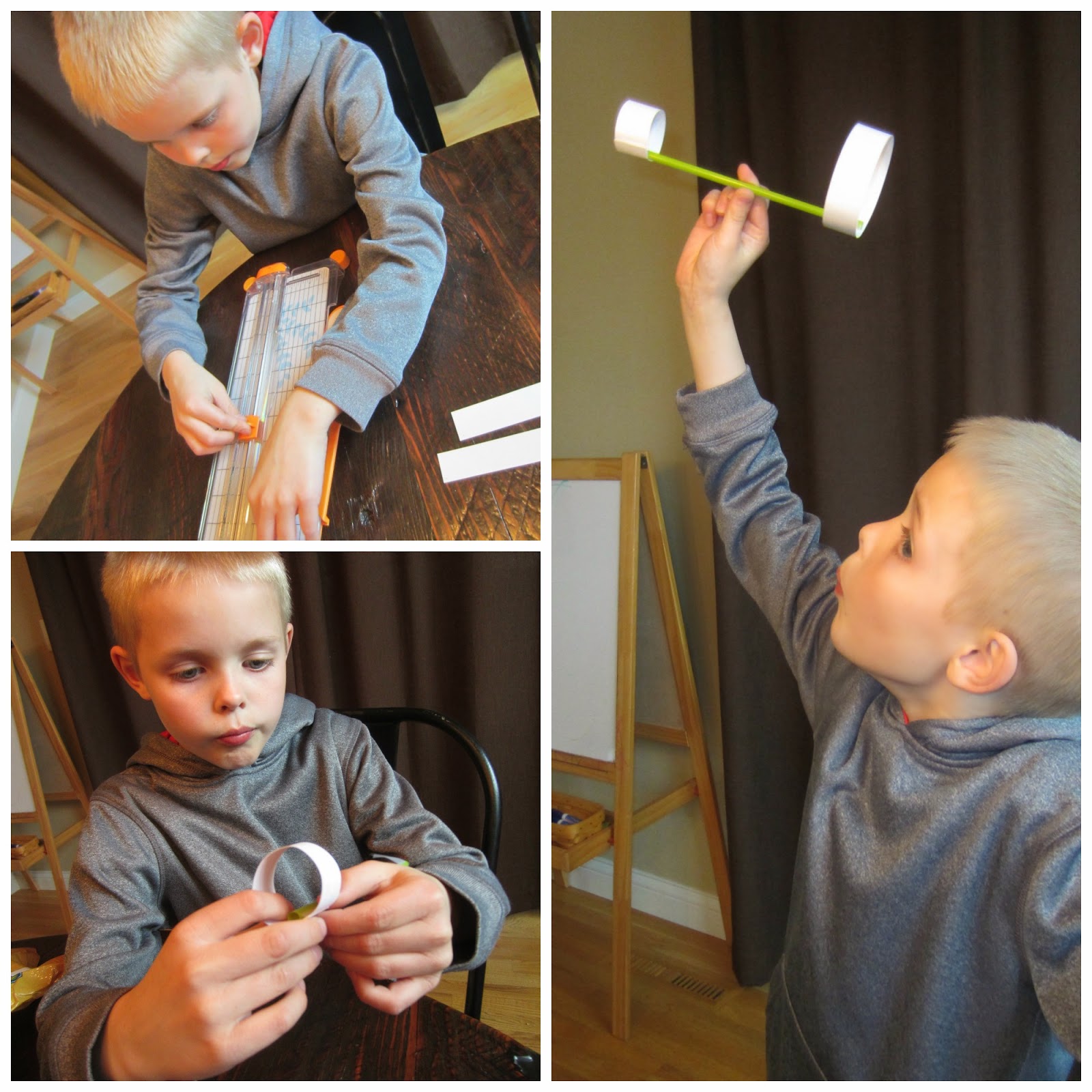 Now hold it by the middle of the straw, and propel your wrist forward releasing it into the air. It keeps going and going and going. This is one of the farthest flying "planes" we've ever made (and we've made A LOT of paper airplanes).

These crafts provide an excellent opportunity to explain aerodynamics, opposing thrust, and gravity. Kids can experiment by adjusting the size of the papers, the number of paper clips on the whirligig, the length of the straw, to observe and record any variance in the performance of the flyer.
Posted by Deceptively Educational at 7:00 AM