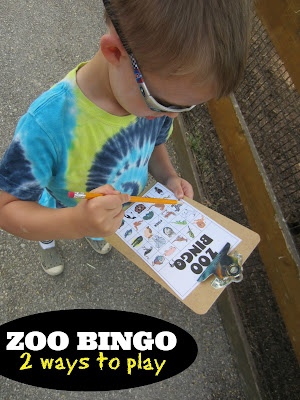 Are you rolling your eyes? I know what you're thinking: another bingo game? Really?

My oldest son loves them and until he stops, I'm going to keep on making them to sneak in some learning.

You've heard that old saying, "If it ain't broke, don't fix it," right?

I made two versions of Zoo BINGO, one for each of my sons based on their abilities. I printed, cut in half, and attached them to mini clipboards.

A freshly sharpened pencil for each and we were ready to have a roarin' good time at the zoo.

Pre-Reader Zoo BINGO
Since our 4-year-old can't read, his card was entirely pictures. Our little guy is still struggling with learning to hold a pencil right and needed help x-ing through the animals we found. His BINGO game became a collaborative mother-son project. (Let's just say, I didn't mind one bit.) 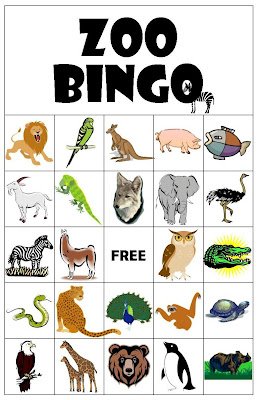 Zoo BINGO for proficient readers
The BINGO card I made for our 8-year-old was entirely words, with each box containing an animal characteristic. To try and get a BINGO, my son had to either use his knowledge of animals or read the exhibit signs to learn about them. 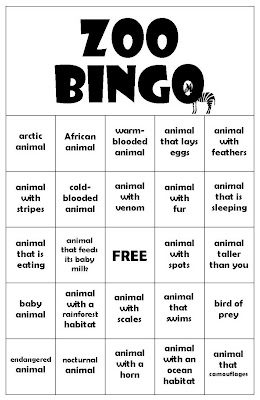 There was only one simple rule for my oldest son: you can only check one box off your BINGO card for each animal. For example, you could not check both the "African animal" and "animal with stripes" boxes when you see the tiger.

It took no time at all before he had a BINGO. Did he stop checking off the boxes then? Nope. When our trip to the zoo came to an end, he had a total of four BINGOs on his card. Not quite black-out, but still quite an accomplishment. 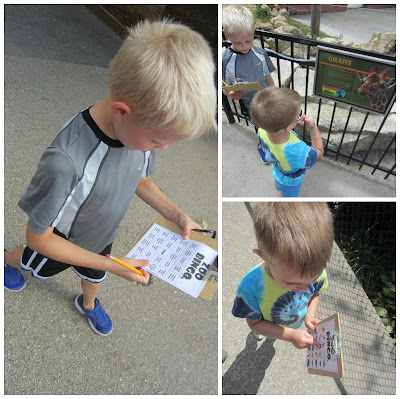 Other visitors at the zoo caught wind of the boys' BINGO games and offered help! Because both boys had done so well, we made a stop at the gift shop on our way out.

Posted by Deceptively Educational at 7:39 AM