It's been awhile since we played the Brown Bag Touch and Feel guessing game, but when my oldest son picked out a book at our library about touch recently, I wanted a way to revisit this particular sense. Given how much my son's writing lacks juicy details, a little adjective practice couldn't hurt either.

This game was easily played by both of our boys (a 3rd grader and preschooler). It's hard to tell which one of them enjoyed it more! 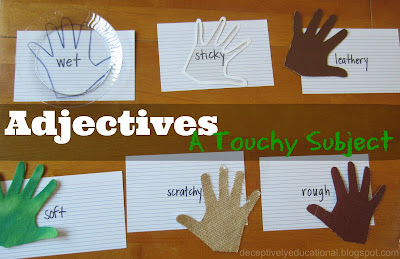 To prepare, I traced my oldest son's hand on heavyweight cardstock and cut out a series of hand shapes. To this I glued a variety of textures. I also used a clear plastic disposable dessert plate, and drew the hand on the bottom with permanent marker.

With my sensory hands made, I wrote adjectives to describe each on an index card.

When my oldest son came home from school, I wrapped a handkerchief around his eyes. (Yes, I made him wear my breast cancer survivor "think pink" bandanna!)

I put the sensory hands in front of him and asked that he touch each one and describe it to me. This was more challenging than we both originally thought. "It's rough," he said of both the sandpaper and burlap hands. I put them both back in front of him and asked, "Do they feel the same? If I couldn't feel them, I would think those two had the same texture based on your description." 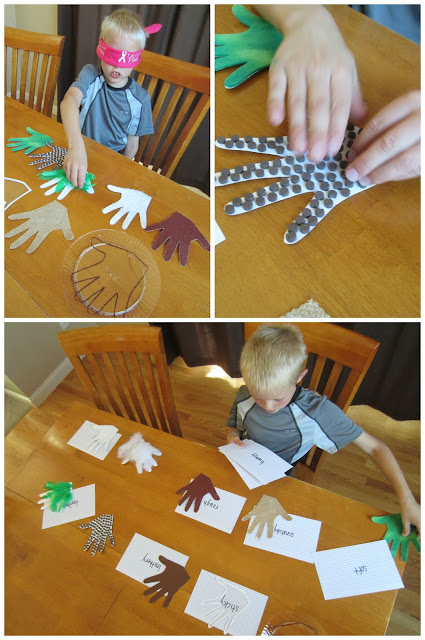 After working harder to describe each uniquely, the blindfold was removed. Now I gave him the index cards I had made earlier and asked him to match the adjectives with the correct sensory hand.

Later when our four-year old played the game, he didn't use the bandanna; we just let him look, feel, and describe what he was touching. His big brother was thrilled to read the cards to him so he could match the descriptive words with the correct textures. I was astounded to see how well he did! 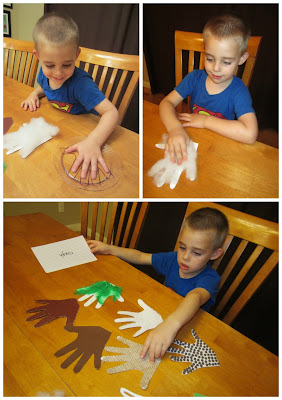 My oldest son read two great children's books as part of this activity. Touch by James De Medeiros focused on texture and pressure, as well as demonstrating our feelings for someone through touch.

Soft and Smooth, Rough and Bumpy by Dana Meachen Rau explained how our skin and nervous system is responsible for our sense of touch.

Want to extend this lesson and learn more about the nervous system? Check out our Straw-Blown Neuron Diagram activity and book recommendation!

Posted by Deceptively Educational at 7:07 AM