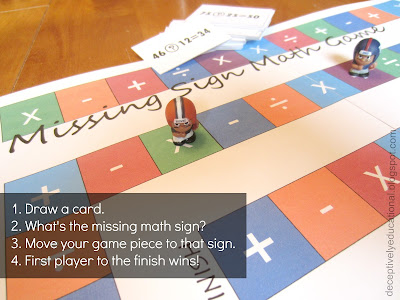 My oldest son's mastery of most of his multiplication facts and his understanding of division make it the perfect time to mix all types of math sentences together for a fun game.

Print, trim the game board, and tape together. Cut and shuffle the cards.

Find a few game pieces to use. My son chose his mini football players. Anything will work such as two different coins, buttons, or poker chips.

As I was shuffling the cards, a neighbor boy rang the doorbell to play. I explained we were playing a math game and his eyes lit up. I invited him in and my son and his buddy played on a team against me.

(I have a pretty strict policy against posting pictures of other children on my blog without a parent's permission, so you'll just have to trust me that this was a riot!) 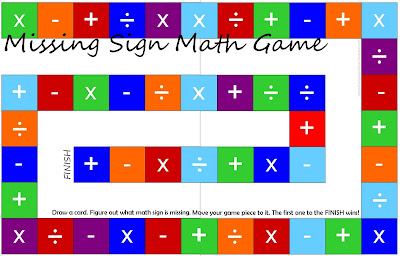 Our two game pieces were placed on the board before the first square (in the upper left corner). The boys drew a card from the deck and determined which math sign was missing (plus, minus, division, or times sign). If their answer was right, they moved their game piece to that sign on the board. The game card was placed in a discard pile. 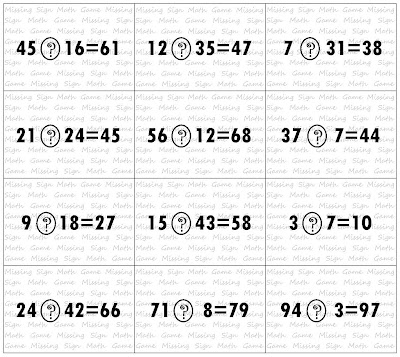 Now it was my turn to do the same.  The boys and I took turns until we both neared the finish. 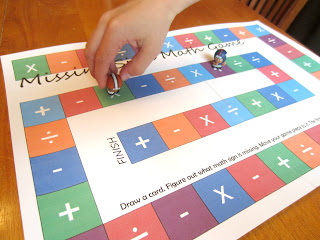 In order to win, I had to draw an addition problem (the last sign on the board). As soon as I did, I was the victor. The boys had so much fun playing, they didn't even care that they'd lost.

Nothing like practicing good sportsmanship AND your math skills at the same time!
Posted by Deceptively Educational at 7:45 AM