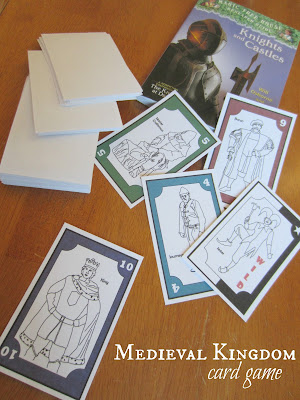 My son has developed a love for non-fiction, and Mary Pope Osborne's Magic Tree House Fact Tracker (or Research Guides) have been a new favorite. When my son was reading the Knights & Castles book, he paid special attention to the hierarchy of people that lived in the Middle Ages, recording in a notebook the feudal system from King down to serf (peasant).

His interest sparked an idea.

What if I made a card game of some of the people in the Middle Ages, and players would have to put them in order from the lowest person in society (i.e. prisoner) to the mightiest and most powerful (i.e. the king)?

With a week of isolation ahead of me due to radioactive iodine treatment, I seized the opportunity to make the illustrations for eleven game cards.

Here's a diagram of the illustrations and the individuals' "rankings" in society. 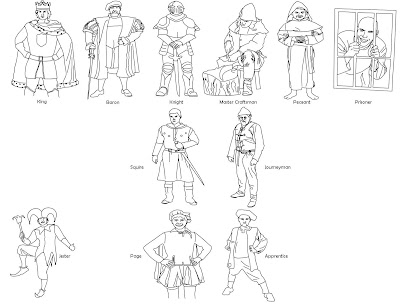 The game is played similar to Skip-Bo Junior, a favorite in our house.

How to Win
The first player to play all of the cards from their stockpile is the winner. 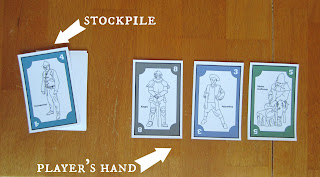 In the playing area between both players, four kingdoms can be started. These four kingdoms, which are essentially piles, are played on by both players and must begin with a No. 1 card (the prisoner) or a Wild (Jester) card, played face up. 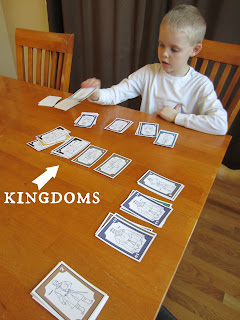 The youngest player looks at the three cards in their "hand" (those dealt face-up by the dealer on the table) as well as the one card on top of their stockpile to see if they can begin a new kingdom or add to an existing one. The player plays all the cards that they can, even those that may be revealed from under another card that was just played. For example, if there is a No. 2 (peasant) card face-up as one kingdom, a player can place the No. 3 (apprentice) or Wild (jester) card on top of it from their hand, as well as any other cards they may have to play. 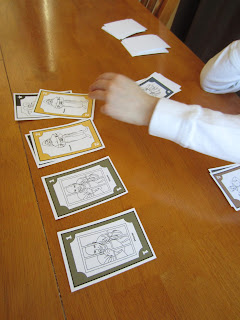 If the card from the stockpile is played, the card underneath is turned over. It's the next player's turn when a player can no longer play any cards from their stockpile or hand.

NOTE: The card on top of the stockpile may not be moved to the player's hand, even if all the cards in one pile of their hand have been played.

Remember, each time it is a player's turn, three new cards are dealt on top of the existing hand from the last round of play. Once the new cards have been dealt, the player can take their turn. 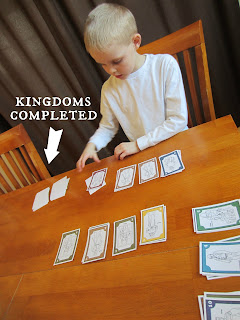 When a kingdom has either been completed with the number cards 1-10 and/or a mix of wild cards, the pile is turned over and removed from the playing area, so a new kingdom can be formed in its place.

If the dealer runs out of cards and neither player has played all the cards from their stockpile, the piles of old kingdoms can be reshuffled to continue play.

My son and I had loads of fun playing this game. He was thrilled to see his notes come to life and the hierarchy of cards supported what he'd learned from the Magic Tree House Fact Tracker about various people's places in Medieval society!

Posted by Deceptively Educational at 7:48 AM