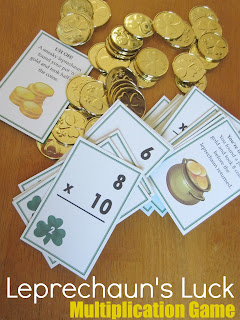 Have you seen those gold plastic shamrock coins they sell at the craft stores?

I've been wracking my brain since last year to come up with some kind of game to play with them.

I dusted off the packages I bought last year, and bought three more when the craft store had a 50-percent off sale (woo hoo!).

Then I made some multiplication fact cards.

On each is printed a shamrock with a 1, 2, or 3 printed on it; this is the number of leprechaun's gold pieces a player gets if they answer the multiplication fact correct. 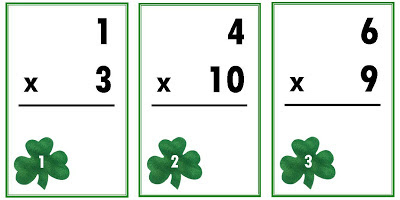 The deck of cards also has three other kind of cards as well. 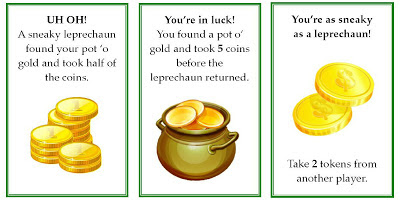 Once the cards were printed on cardstock, I spray glued some green office paper to the back before cutting them out. This gave the cards some weight. Download the cards here.

When my son got home from school, I had everything we needed to play: the deck of cards, the gold shamrock coins, and a multiplication table to help him with the especially hard problems.

I put the coins on the table in a small box with the deck of cards face-down.

Playing was easy. One by one, we took turns drawing cards, solving the problems, grabbing coins from the box with each right answer, putting them back and taking from each other's pile of gold coins as the special cards instructed. If we missed the problem, no coins were awarded. 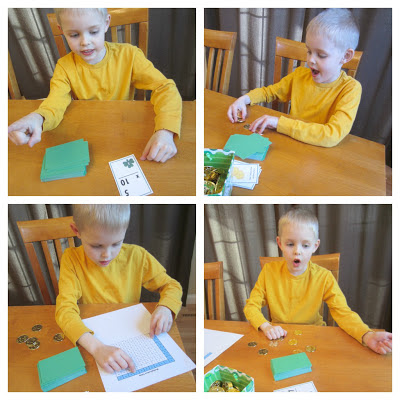 I had set the timer on our microwave for ten minutes. When time was up, we counted our coins to see who had the most leprechaun gold.

This was simple and a much more fun way to practice multiplication facts than flash cards. My son agreed!
Posted by Deceptively Educational at 7:42 AM