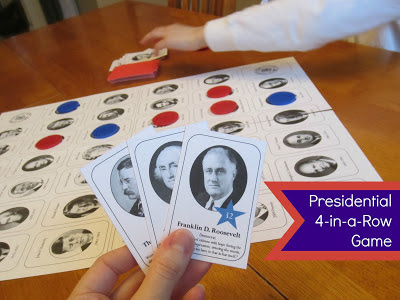 My son thinks our nation's presidential legacy is fascinating. And since President's Day is this month, I cooked up a fun game to help us celebrate.

If you've played Sequence for Kids, you'll recognize the rules. The game board and cards feature 19 of the most "famous" presidents in U.S. history. Each card features: 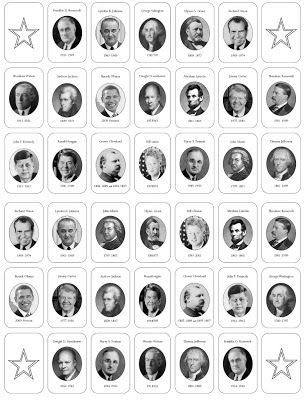 The Objective
The first player to get four of their own game pieces on the game board in a row (horizontally or vertically) wins.

How to Play
Each player is dealt three cards and looks at their hand. The remaining card deck is the draw pile. 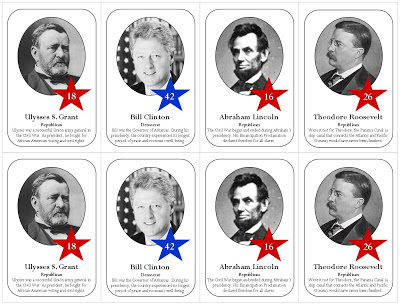 Players can place a game piece on any president they have a card for in their hand. One game piece is placed on the board per turn. 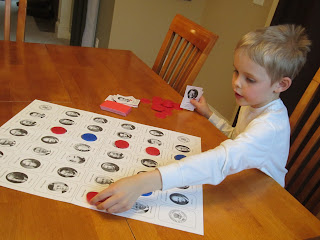 The card played is placed in a discard pile and the player draws a new card. Players should always have three cards in their hand. 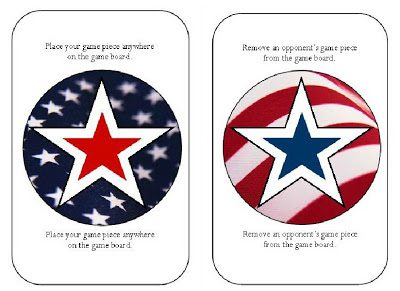 The player discards the special card, and in the case of the "remove an opponent's game piece," they cannot place their own game piece in its place until their next turn.

Star Spaces The four corners of the game board are free spaces. A player can use one of these spaces as one of their four-in-a-row. These are the only four spaces on the board that more than one player can place a game piece on.

Personal note: I tried my best to make sure there were no errors (it was a lot of facts to keep straight). If you spot one, please let me know!

Looking for a fun book to pair with this activity? I've got a great one. We LOVE Judith St. George's book So You Want to Be President?. It's such a clever way to learn about the country's past presidents. My son took this to school when it was his week to share his favorite book with the class.

CREDIT: This activity would not have been possible without the amazing free clipart of the presidents, available at WPClipart.

Posted by Deceptively Educational at 7:08 AM