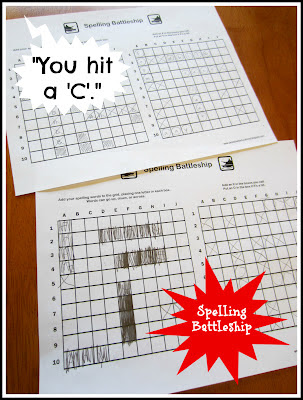 I wish I could claim this idea as my own, but truthfully, it’s not.

When the well of inspiration ran dry, I turned to my Pinterest boards.

Finding Spelling Battleship on the blog Mrs. T’s First Grade Class, was an experience akin to someone slapping me upside the head, having an “ah-ha” moment, or finding a $20 bill in an old pair of jeans.

Instantly I knew my son would go cRaZY for this!

Battleship is his favorite “board” game right now. Since Jill’s game board was a little smaller than I wanted, I made my own.

All you need is to print two and make sure you have a folder to stand up between players. Oh, and spelling words. You're going to need a handful of those too.

Now I picked five of the most challenging words from my son’s spelling list; I specifically picked words that varied in length.

Now we both added the words, one letter per box, to the grid on the left side of the game board. Note: words should not be written diagonally.

Now Player 1 calls out a coordinate (e.g. D2) with the hope that the opponent has written one of the words’ letters in that box. Each time Player 1 calls a coordinate, he/she marks an “X” in that space on the right side of their game board.

If a letter is in the space called, Player 2 says so (and can even indicate the word that was hit or the letter), and instead of an X, Player 1 writes an O in the box called. Player 2 puts an X through the box that was called as well, covering the letter, on the left side of their game board. Coordinates that don't hit letters can also be recorded by Player 2 if they so desire. 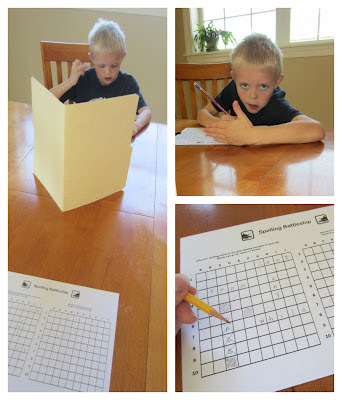 Play alternates between two players. When the coordinates for an entire word are hit, the player must announce it. The aim is to call coordinates that successfully locate all the spelling words. 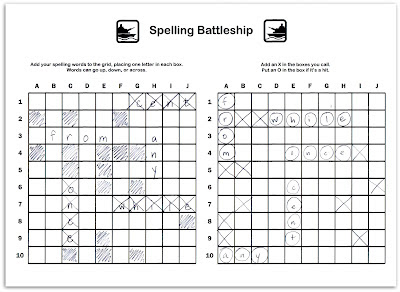 This is SUCH a fun way to reinforce spelling! Thanks, Jill, for sharing your genius!
Posted by Deceptively Educational at 8:54 AM