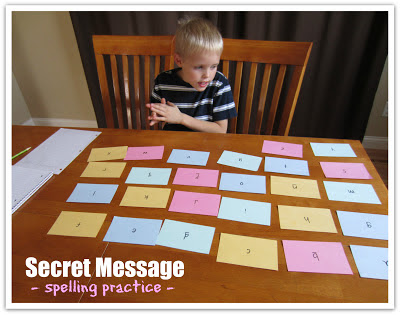 Wow. My son's doing the challenge list of spelling words at school. Let's just say this momma got pretty comfortable working on only a few troublesome words a week.

Now the entire list is troublesome (a second grader spelling migration?)!! Good thing my son is up for the challenge ... and it's a good thing I am too!

My secret-code lovin' boy had a lot of fun with this spelling practice activity. While it took a little prep and a small prize I'd purchased at Target, it was worth the small investment I made. Here's how to get it ready:

EXAMPLE SECRET MESSAGE
Spelling is hard and practice is boring. Think hard! When you spell correctly, a prize is yours. Get yourself something sweet and there you’ll find a different kind of treat.
(30 words in the surprise phrase)


PLAY
Give the child the index cards and ask that they first put them in alphabetical order, and then lay them out so each is visible. 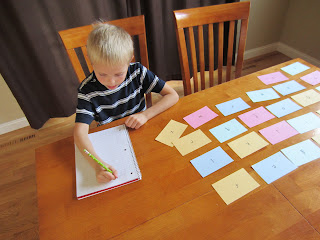 Call out the first spelling word to your child in the predetermined order (remember, you must call the words in the same order that you used during preparation). Have your son/daughter write the spelling word down on a piece of paper (1.). When they’ve spelled the word, have them turn over the letter cards to match what’s written on the paper (2.).

Have them record the words they see and turn the card back over (3.). Oops! If there’s no word on the back, or no word with the right numeral (i.e. the number one when you’re on the first word), a spelling error has occurred. Have your son/daughter draw a line through the word on the back of the cards after they've used it to avoid confusion if letters are repeated. 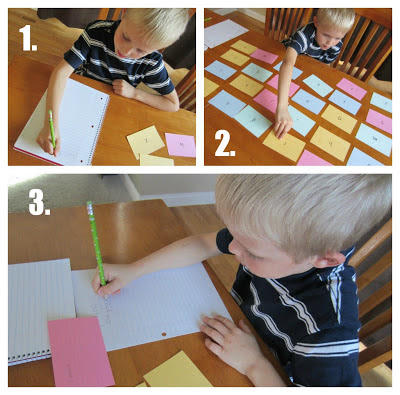 Encourage your child with clues to correct the misspelling. Keep going and call out the second spelling word. Repeat the process until the secret message has been revealed (our message was a clue that led my son to a hidden prize).

TIP
I used pencil to write the secret message words on the back of my index cards. Simply erase away the old words and it’s time for next week’s challenge words and a new secret message.
Posted by Deceptively Educational at 8:04 AM