Love in Many Languages Puzzles 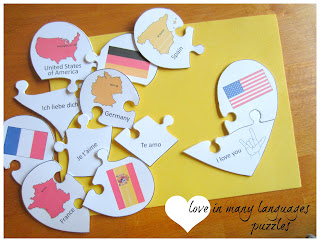 Have you seen that commercial from Allstate? The one with the male (supposedly) French model she met on the Internet? My seven year old has been walking around the house saying “bonjour” thanks to this little marketing spot.

To springboard off his new found interest in foreign languages, I made him a series of four heart-shaped puzzles.

Each heart contains three pieces: the shape of a country, that country’s flag, and the way you say “I love you” in the language spoken there.
I printed the puzzles on cardstock, spray glued them to craft foam and cut them out. Then I jumbled them all together so my son had to really work to put them together. 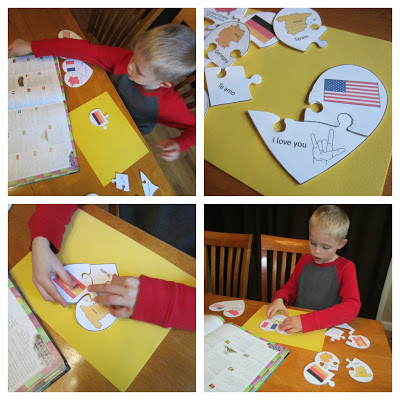 He referred to his Reader’s Digest Children’s Atlas (which has each country’s flag in the back) for help.


While this wasn’t an extensive foreign language lesson, it was fun to exchange I love yous with my son in a language other than English!

Posted by Deceptively Educational at 7:28 AM