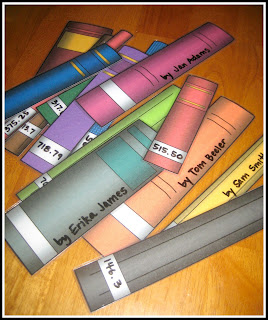 Children’s librarians tirelessly go through the shelves day in and day out to reorganize the books kids carelessly pull out and shove back in at some other totally random spot. I cannot imagine how frustrating it must be! The school gives kids paint sticks to mark where they removed the book so it can be returned to the same spot if necessary, but not every kid grabs one and sooner or later they’ll all have to be able to figure out the books’ rightful place – including my son.

Before he got started with the library-inspired activity I made, we read a sweet book about library puppets (used during story time) that come to life when the lights go out. It put us in the mood for our own imaginary trip to the library.

When the story was finished, I gave my son some laminated “books” I’d made. On several were written the author’s names with a fine-tip dry-erase marker; the rest had card catalog numbers.

I asked my son which were fiction and which were non-fiction books. He wasn’t sure.

He promptly sorted the books into two piles – those with authors (fiction) and those with numbers (non-fiction).

Now I told him to put them in order.

He looked at the card catalog numbers on the non-fiction books, and put the book with the smallest numbers first and the largest numbers at the end of our imaginary shelf.

He alphabetized the fiction books by the first (and sometimes second) letter of the author’s last name.

Books with numbers like 145.21 and 110.4 tripped him up a bit. I explained that you focus first on the digits in front of the decimal.

My son beamed with pride when all the books were reshelved in the right order!

Maybe he’s a future librarian.
Posted by Deceptively Educational at 7:21 AM