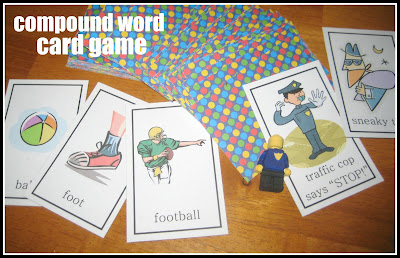 Compound words are like addition problems with words instead of numbers. For a math-loving boy like my son, that makes them extra cool. His first brush with the concept of combining two words was a GoGurt wrapper that had “star + rock = what?” ROCK STAR! (Okay, so this isn’t a REAL compound word, but it was the inspiration for this activity.)

After explaining what a compound word was, my son and I read Once There Was a Bull … Frog. Rick Walton's book is the perfect complement to this activity. It has TONS of compound words in it. After pointing out the first few, my son was able to identify most of the rest.

Now he was ready for my DIY compound word card game!


How to Play
Shuffle all the cards. Deal 8 cards to each player. Place the remaining cards facedown on the table and flip over the top card. This is the beginning of the discard pile.

Each player should look at their cards. Any cards with compound words should be laid face-up on the table (e.g. cupcake, mailman, football). Any cards that contain words that are in that compound word should also be laid down (e.g. cup, man, ball) with the compound word card. All other cards are held in the player’s hand.

When it’s each player’s turn, they can choose to draw a card or pick up the card on top of the discard pile. Each player should discard a card with each turn.

If the draw pile becomes totally depleted, the discard pile can be reshuffled to continue play.

THE OBJECTIVE
Make three matches (the stoplight cards above are an example). A match contains 3 cards: the compound word card (e.g. toothbrush), and the two cards that contain the words that it is made up of (e.g. tooth and brush). The first player to make three matches wins the game.

TRAFFIC COP CARD
When a player plays the Traffic Cop card, he or she puts it in the discard pile, and moves the small object on top of one of the match piles an opponent is building. This prevents them from building that compound word match until they draw the traffic cop and can move the small object to one of their opponent’s piles.

Like the Sneaky Thief card, the next player cannot pick up the Traffic Cop card from the discard pile. 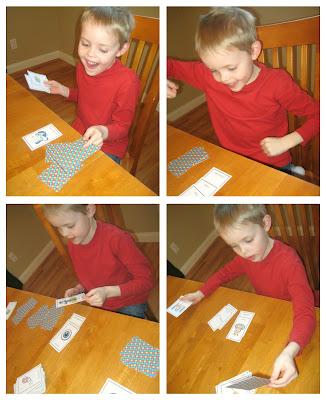 This was a GREAT way to help my son understand what a compound word is and help him identify them!

Since a lot of this game is based on luck, kids AND adults will have fun playing. (My son sure enjoyed beating me!)
Posted by Deceptively Educational at 7:07 AM