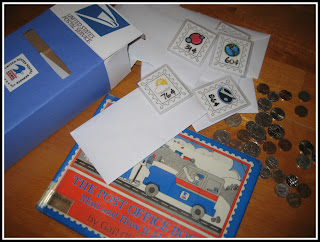 For a little coin-counting practice, I created this fun activity for my son; not only did it work on money and numbers, but it taught him about the postal system too!

You should have seen his eyes light up when he saw our homemade post office box. He was SO curious to see how we’d be using it in our activity, he barely suffered through the book we read.

I have lost count of the number of books we’ve read by Gail Gibbons. Her book The Post Office Book: Mail and How it Moves didn’t disappoint. Like the other non-fiction gems she’s penned, this book simplified a complex subject in a way my son could grasp. He loved seeing all the ways the mail moves from its origination to its destination – including the historical references to the Pony Express.

When we were done with Gibbons’ book, I gave him:

His task was simple: open each envelope, empty the coins, count them, and find the stamp with the same amount of cents written on it (I used a fine-tip dry-erase marker to write the amounts on each). After he’d bought his stamp, he set the coins aside. He stuck the stamp to the envelope (there were Velcro dots on each) and “mailed” the envelope. 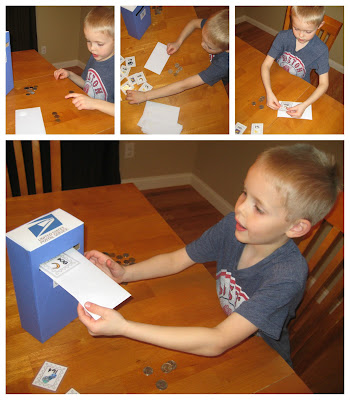 Because the stamps are laminated, I can easily wipe away the old amounts and write new ones on. Using the velcro dots is another way to make this activity reusable.

This was GREAT practice counting money and my son loved it. Once all 12 envelopes were mailed, he even counted the number of each type of coin he had “spent” on stamps.
Posted by Deceptively Educational at 7:43 AM