Exploring (and Making) a Coral Reef 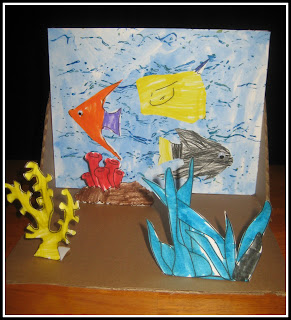 My son can’t get enough of Amanda Lumry’s Adventures of Riley books. I love them, too.

These books talk about wildlife preservation and conservation of natural resources in a way that kids can connect to. Nine-year-old Riley takes excursions all over the world with his Uncle Max and Aunt Martha, who are scientists, with their daughter Alice (Riley’s cousin) in tow.

When our local library had a new one of Lumry’s Adventures, I nearly got tennis elbow grabbing it off the shelf.

Riddle of the Reef provided an awesome lesson in the coral life cycle, how fragile their ecosystem is, and the dangers that threaten the Great Barrier Reef.

Once we’d read all about Riley’s adventure to the world’s largest reef, we made our own 3-D coral reef.

I cut some cardboard to build a standing frame. Then, my son painted a piece of cardstock ocean blue. Afterwards, I gave him a DIY rolling pin covered in a paper towel tube. (Once done with the project, I tore off the tube; now the rolling pin is ready for our next project!) 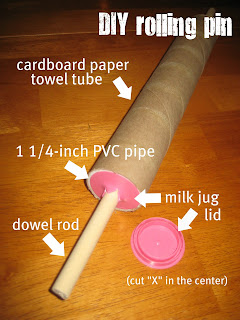 He used a Sharpie marker to draw undulating waves and bubbles on the cardboard tube. When done, I traced over his lines with a low-temp glue gun. Afterwards, we smeared some acrylic paint around on top of a piece of clingwrap and rolled the rolling pin through it. This became a giant rolling stamp that when rolled over the blue-painted paper, looked like the undulation of the water. We LOVED the effect it created! 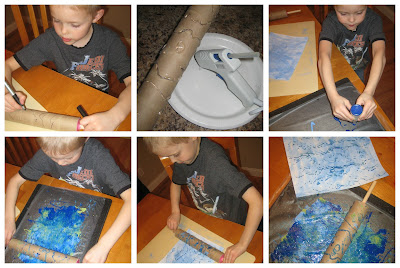 While that dried, I gave my son some cut-outs I’d created.

The marine life were printed on sticker paper. The coral was printed on heavyweight cardstock. He set about the task of coloring three of each.

When done, I glued his ocean background to the cardboard structure and we cut out what he’d colored. After peeling off the backing from the fish and ray, they were added to the water backdrop.

Next, we folded the bottoms of the coral cut-outs and using the low-temp glue, attached them to our sea floor. This project was so much fun and the 3-D effect is truly magical!
Posted by Deceptively Educational at 7:55 AM