The schools here use the Jolly Phonics program to teach kids letter sounds. I'm sure there are loads of alternatives, but I'm a fan of how the program combines a catchy tune, memorable song lyrics, representative object, and hand actions to make phonics really stick in kids' heads.

Our youngest son had his first introduction to the Jolly Phonics program in his alternative kindergarten class (aka Pre-K) last year. This year in kindergarten, he's getting it again. With the first few weeks of class underway, I wanted to test his knowledge of the first five sounds his kindergarten teacher had explored. 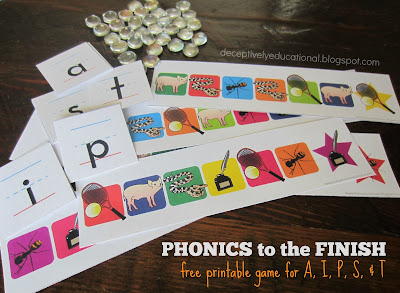 Out of that curiosity, this game was born. Download a PDF of six game boards and playing cards free on Google Drive here. 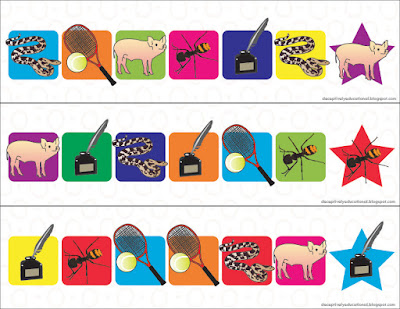 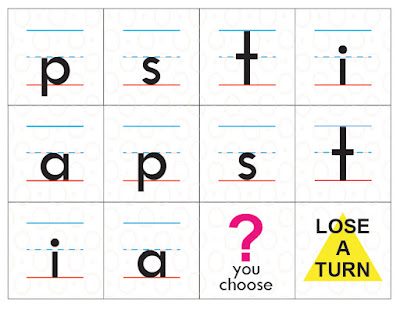 All you'll need is the printed game boards, 3-4 pages of the cards printed and cut apart, and about seven game pieces per player.

The objects I used on these cards correspond with the Jolly Phonics program for the letters A, I, P, S, and T.

How to Play
Shuffle the playing cards well and put them either in a pile between the players or in a stack face down.

Players can only place game pieces on objects in order. Once the card is filled and the final object (inside the star) is covered, the player has won the game. 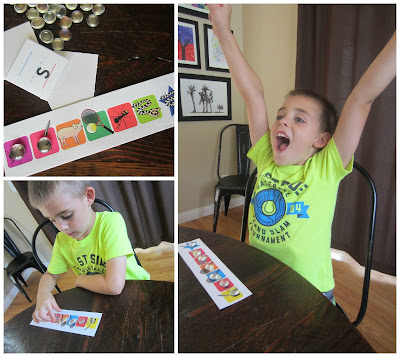 Beware! There are lose a turn cards. There are also "You Choose" cards that are like WILD cards, and allow a player to place a game piece on the next object on their game card.

NOTE: You may need to remind your child when reading the letter on their playing card, that the red line on the card should be on the bottom. This will help your child correctly orient the card so as not to confuse the "p" with a "d."

Not familiar with Jolly Phonics? Query YouTube to view videos of the songs!