My 9-year-old son came up with this game. I'm not sure what the inspiration was, but we have had loads of fun playing it. It's simple enough for our youngest to play (age 5) and engaging enough that even parents will have fun. 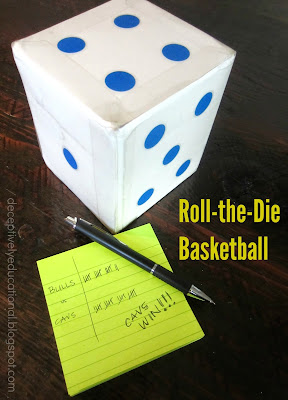 This is a two-person game, or rather a two-team game. If you have more than two players, they can take turns rolling for their team.

What You Need
a die
paper and pen for score keeping

How to Play
Each player (or team if there are more than two players) must pick a team name.

For tip off, both players roll the die. The player with the higher number, gets the "ball" first and will therefore, roll again.

If he/she rolls a 1 or 2, it's a turnover and the other team gets the ball.

If they roll a 3, it's a free throw (1 point for the player/team that rolled, and then the other team gets the ball).

If the die reveals a 4 or 5, it's a 2-point shot (2 points for the player/team that rolled, and then the other team gets the ball). 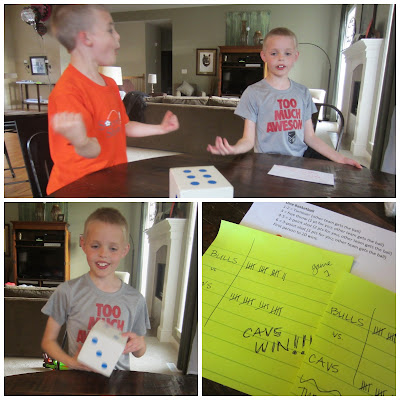 The first person/team to 20 points wins. Keep track of points with tally marks on a paper.

Keep track of turnovers with tally marks, as well as the points scored.

Make a bracket of teams and play games to see who makes it to the finals and wins!

This would be an excellent game to play at a restaurant while waiting for your order, or if you put the die inside a small lidded plastic container and shake to roll, it could even be a travel game for long car rides!
Posted by Deceptively Educational at 6:00 AM