Ancient civilizations are fascinating. To open my oldest son's eyes to this, I made a Greek temple building game. The objective is simple: See which player can race to build their ancient temple first. 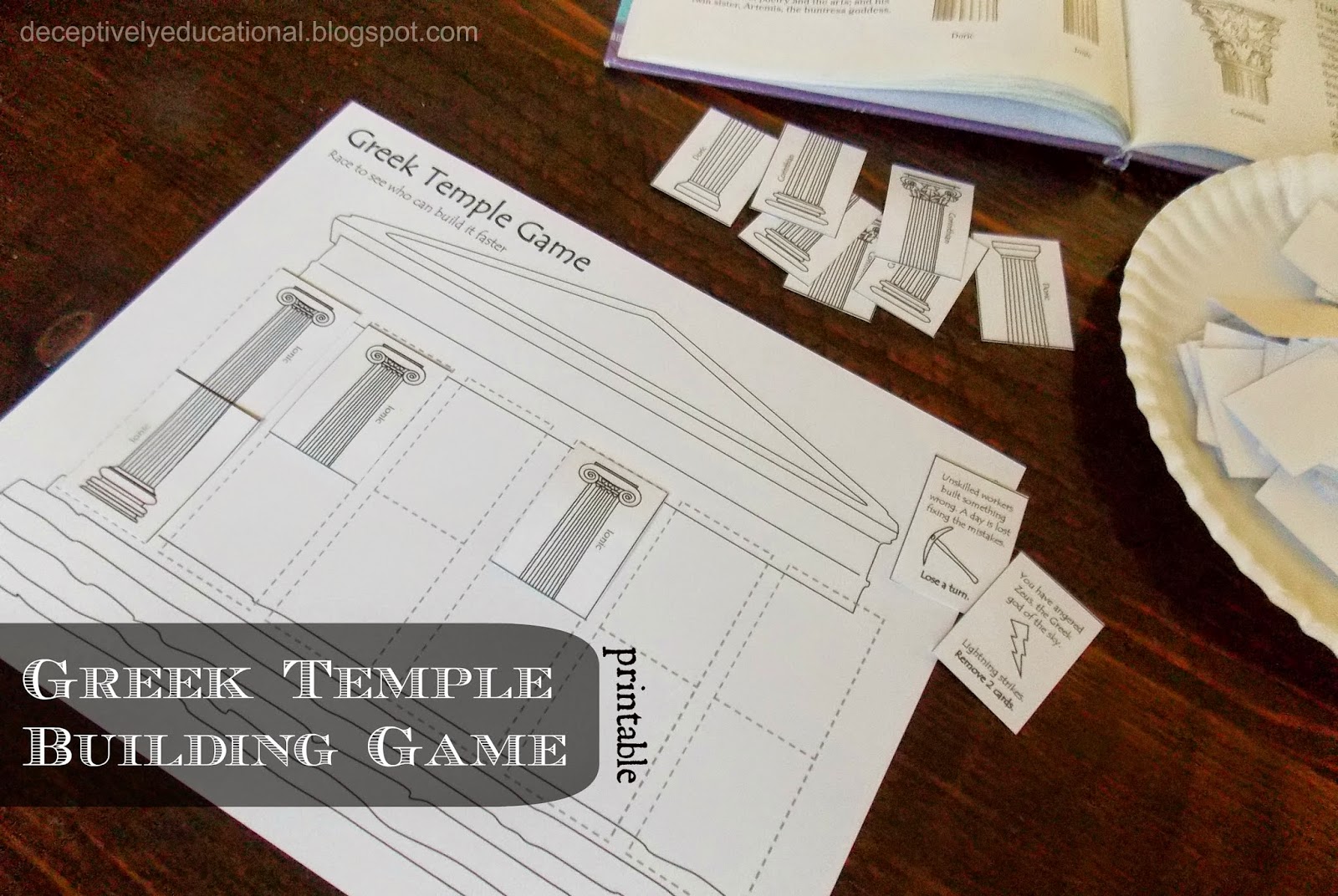 Before we started, we read a little about Greek temples and the three types of columns (i.e. Doric, Ionic, and Corinthian) used.

We looked at pictures of temple ruins and my son immediately clued in to how the columns are supports for the roof. "Like the paper and book structure we built, right?" I responded. (See our recent engineering challenge.)

He was ready. I put a game board in front of each of us. 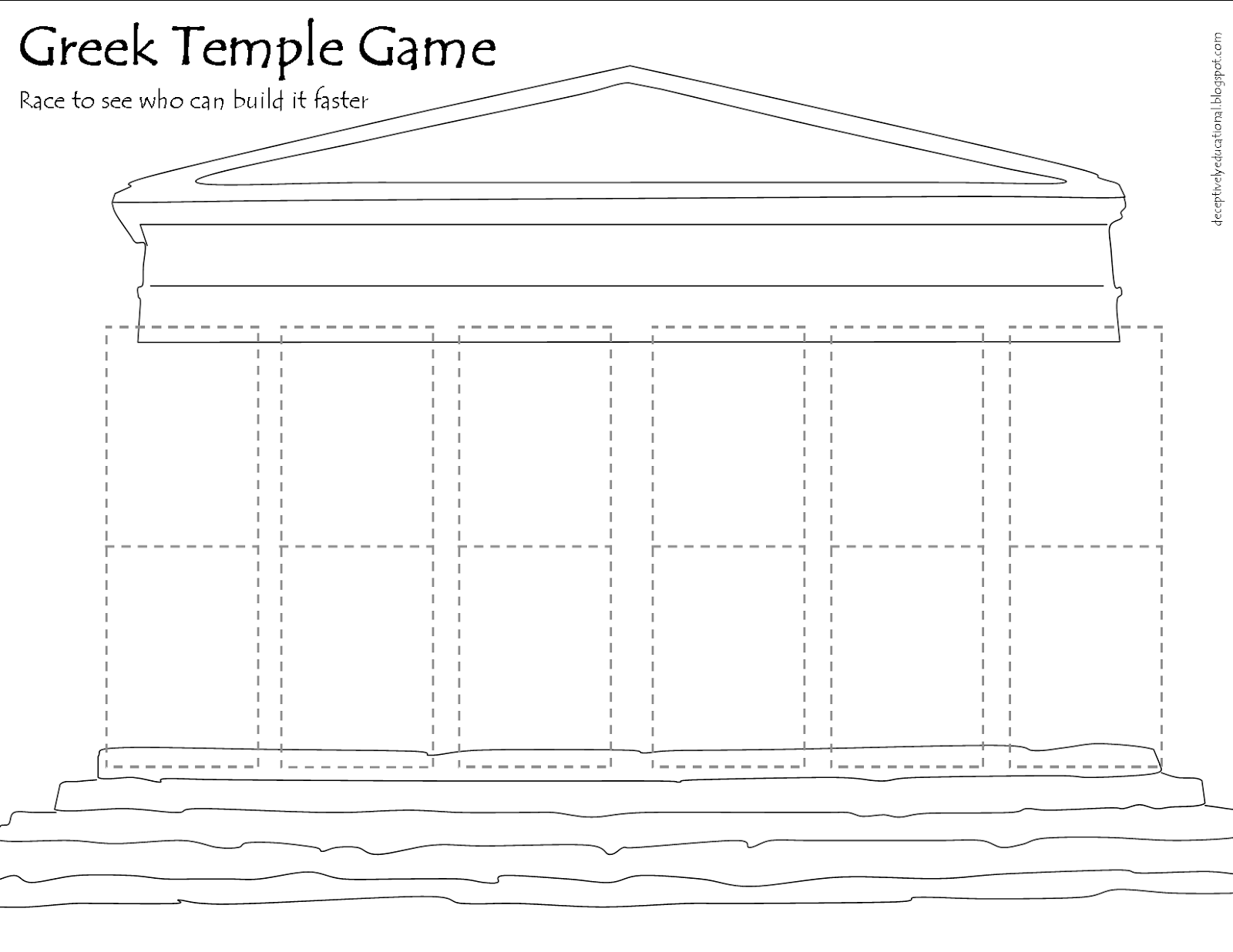 Between us was a plate of small game cards in a messy pile face down. (Rather than shuffle these tiny cards, I used a "go fish" mix method.) 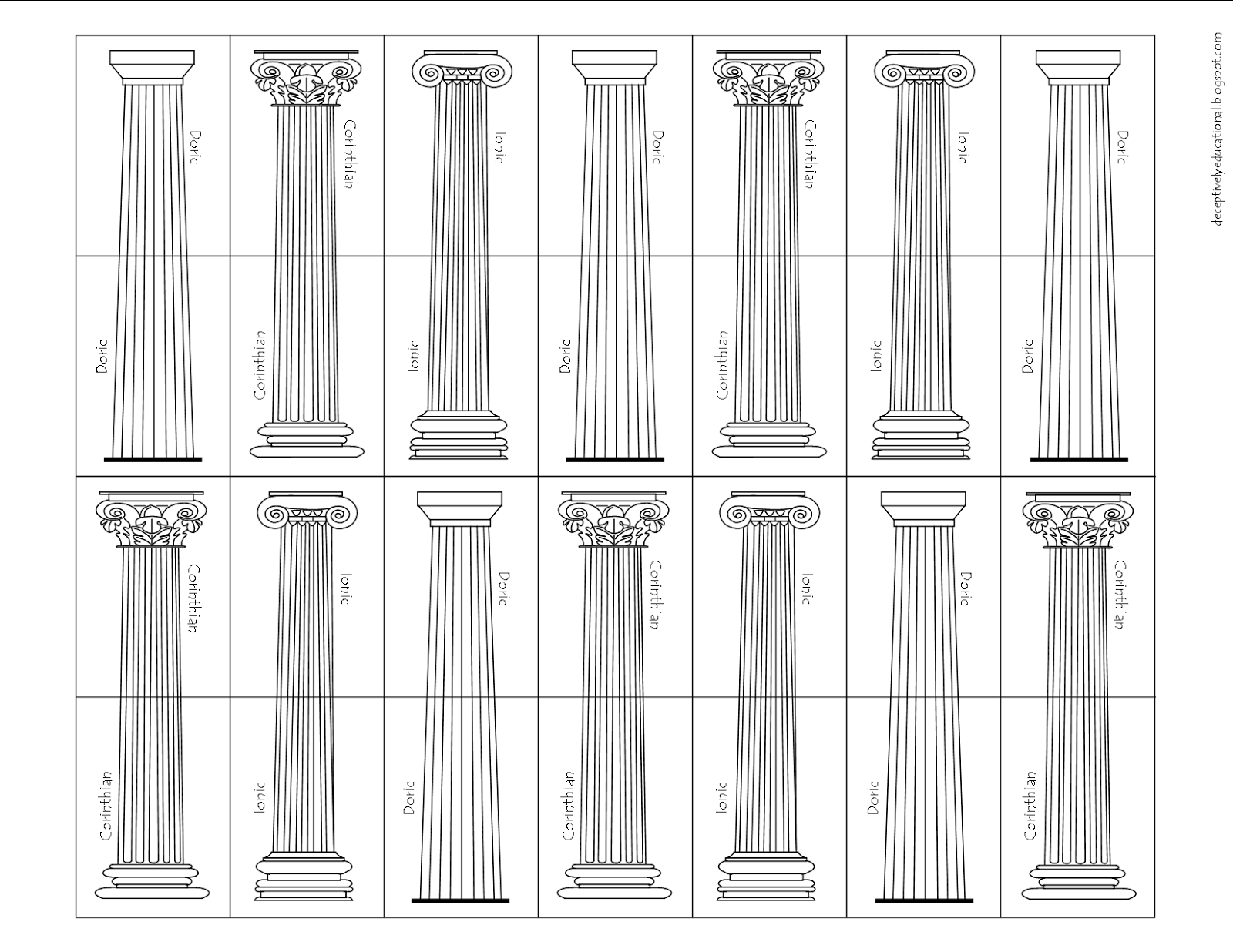 My son started, grabbing one card and placing the column part on his temple. Next it was my turn; I did the same.

The objective is to get a whole temple of columns before your opponent(s). The tricky part is that all the columns must be the same type (e.g. all Corinthian tops and bottoms). 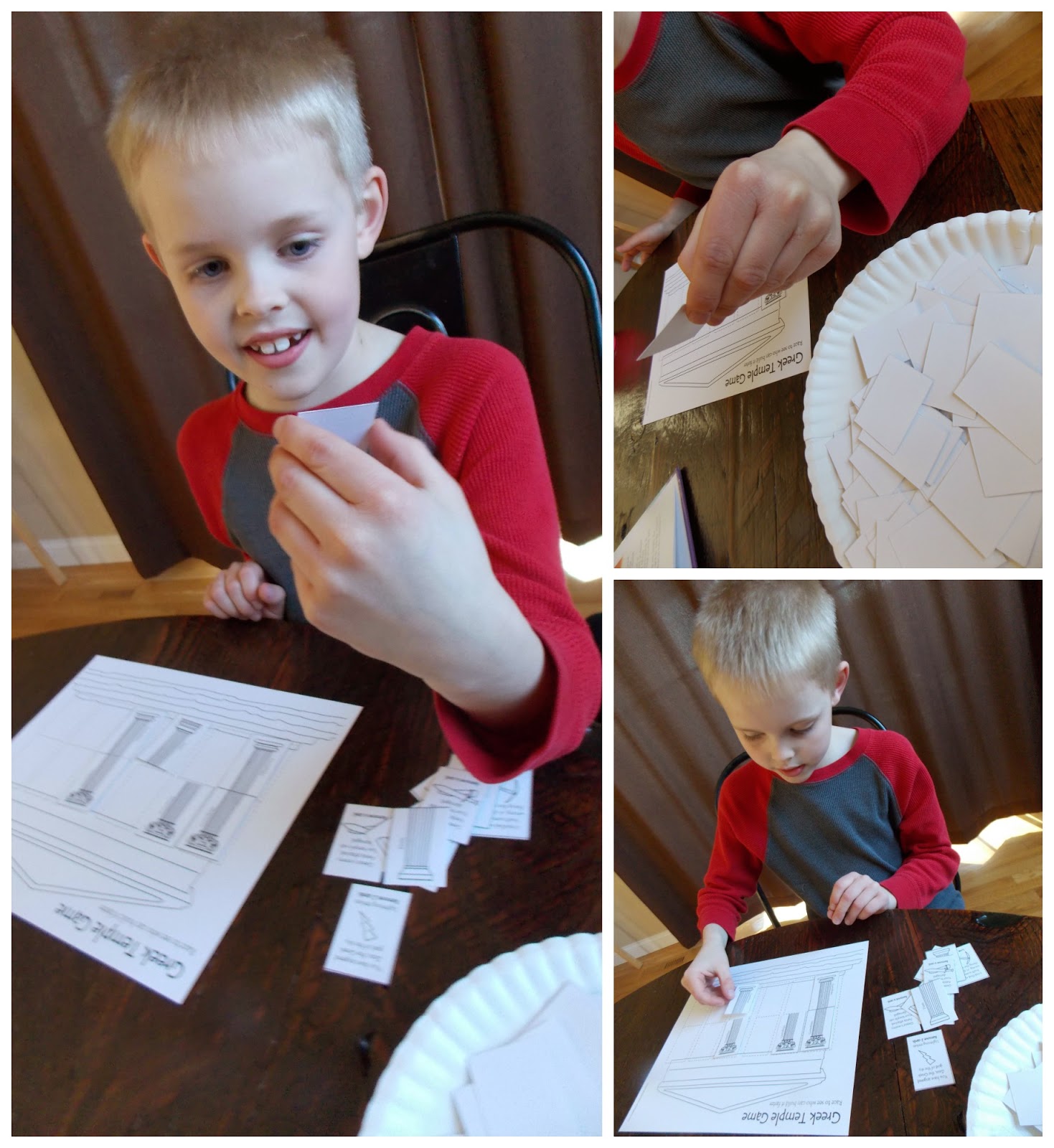 In the beginning our columns were a mismatch. But as the board filled up, we gradually each selected the type of columns our finished temple would have. Once filled with mismatched columns, we replaced cards with our chosen type, putting cards of other types that we didn't need in a discard pile.

NOTE: Make sure your child understands what the tops of each column type look like, or they may be apt to confuse the tops and bottoms. 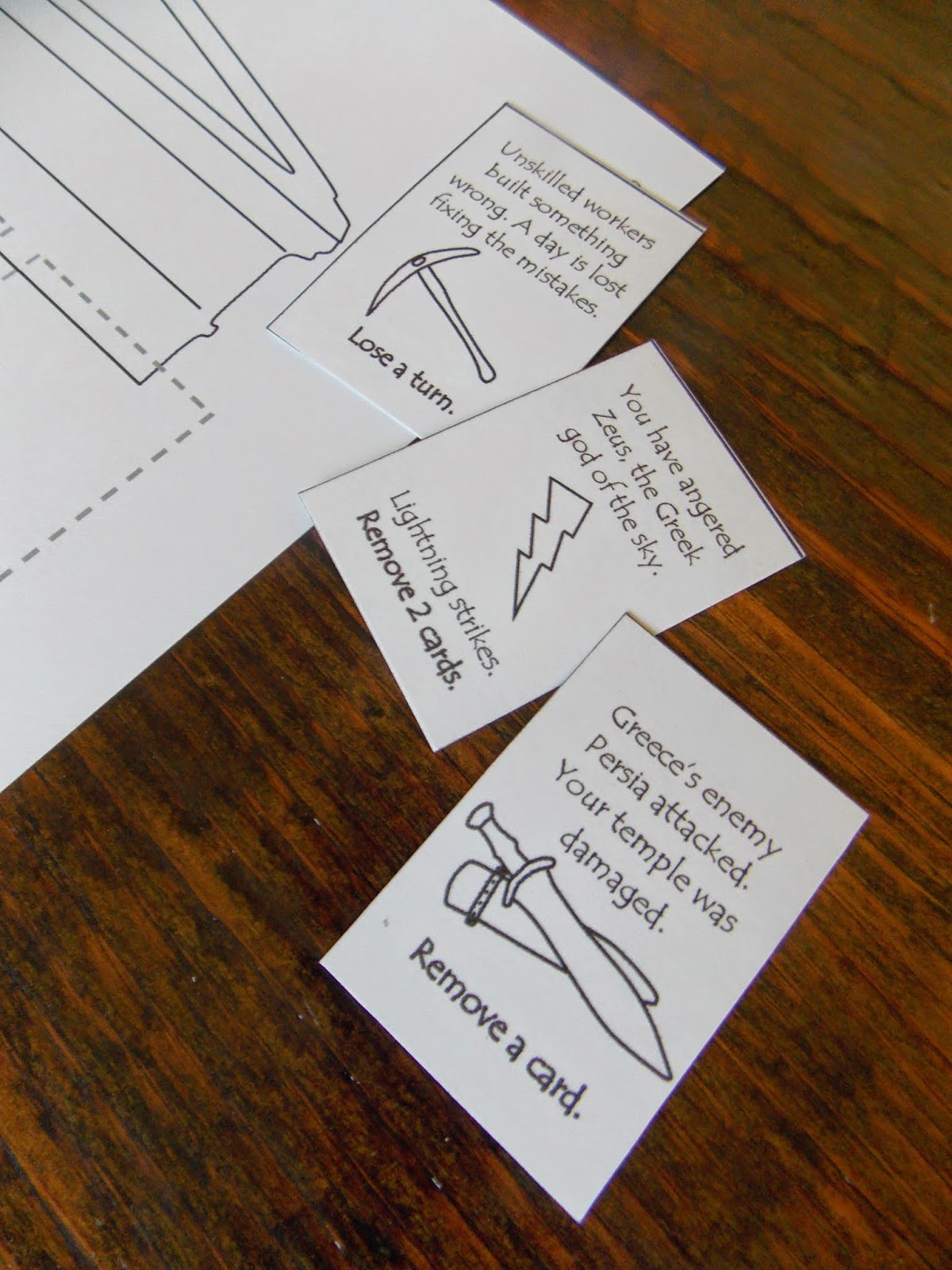 Watch out! The game contains cards that will have players removing some of their cards. While the temple is a mismatch of different columns, this is no big deal, but as players near building completion, it can be a real game changer.

When a player draws the "Lose a turn" card, they do not get to add a card to their temple. These special cards are added to the discard pile before the player's next turn.

My son had a lot more fun with this game than even I anticipated, asking to play again before the first game was through. It had him calling out,  "YES! I got a Corinthian!" and "Noooo. I don't need a Doric." Suffice it to say, he learned the different names for the columns playing this game.

Want a great book to accompany this game? We love the Magic Tree House Fact Trackers!