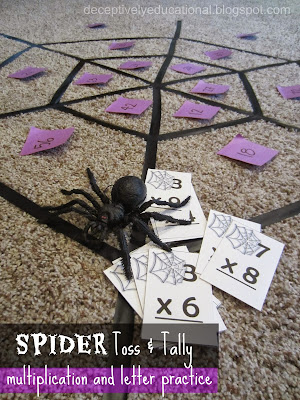 It's shocking how much fun you can have with black electrical tape and a plastic spider. Just ask my boys! Or my husband for that matter (he even got in on the action with this activity).

Prep is simple. Grab a roll of black electrical tape and some scissors. Cut pieces and place them on the carpet in the shape of a large spider web. Our web had 18 negative spaces between the electrical tape lines.

Multiplication Practice
I made 18 multiplication fact cards (the majority of the problems are the fearsome 15 that often trip kids up). I put one answer each on 18 sticky notes. I placed one note inside each of the spaces in the web.

Now, with a scratch pad and pencil and one big plastic spider, we were ready to play. My oldest son turned over the first multiplication fact card, answered the problem, located the answer in the web, and gave the spider a toss. He got two points for correctly answering the problem and if he could land the spider on the space in the web with the answer, he got a bonus point.

This was harder than you can imagine. You'd think our spider had springs in his legs, the way he bounced! 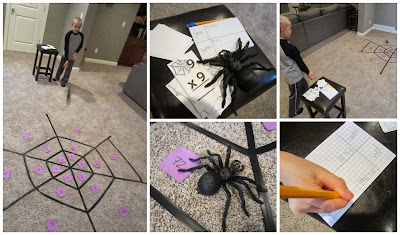 We took turns, and made tally marks on our paper to keep score. When we'd gone through all the problems, we counted our marks to see who won.

Letter Recognition (PreK)
For our 4-year-old son, I removed the numbered notes from the web and replaced them with notes that had upper and lower case letters. Since he's still struggling with letter recognition, we just used the letters A through D. I printed cards with these letters. 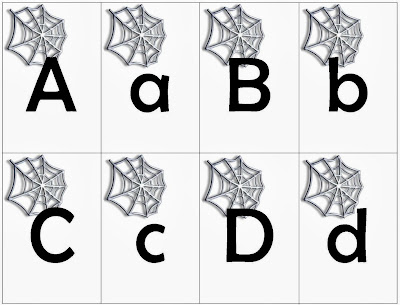 When he turned the card over, I told him the letter, asked him to repeat it with me, and walk up and find it on the spiderweb. Then he tossed the spider and tried to get it to land there.

He could care less about keeping score, and simply loved running around our basement each time he landed the spider on the letter he'd drawn! I love his enthusiasm! 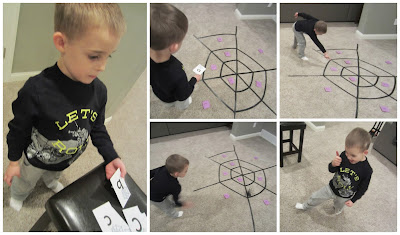 You could play this so many ways. Have the cards kids draw be upper case letters and the web's notes be lowercase, or have all the letters be from the child's name. Pick whatever letters you like. The PDF I made includes all 26 in both upper AND lower case. Download it free here from Google Drive.

It's simple, but so much fun!

Posted by Deceptively Educational at 7:42 AM