It's been too long since our last space escapade. And while we've studied constellations before (check out If I was a Constellation and Oatmeal Container Planetarium), I wanted to keep the interest alive for my oldest son. 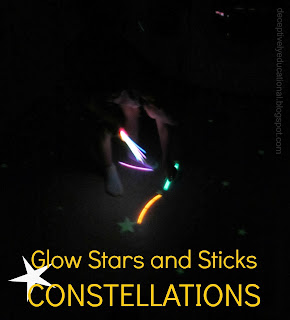 With packages of glow-in-the-dark stars and glow bracelets, it was time for star gazing. Our windowless laundry room provided the best spot for this afternoon adventure.

I placed the stars on the floor, making three constellations: Little Dipper, Orion, and Cassiopeia. I left the light on, to power up the photoluminscent stars. And I waited. 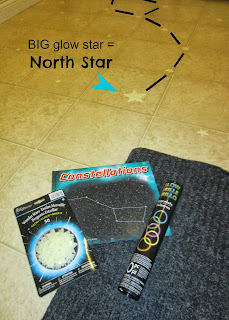 When my son got home from school, we read Constellations by Martha E. H. Rustad. It jogged my son's memory about these connect-the-star formations in the night sky and introduced a handful of the most popular constellations.


When he finished reading, I grabbed glow bracelets and we bent and cracked them to get the glow going. 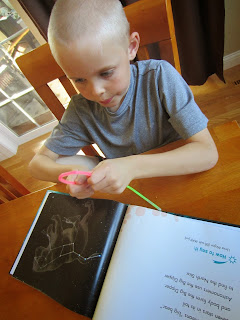 Now we went into the laundry room with the book in hand. I explained to him that he needed to find the three constellations in the stars on the ground. Once he found the patterns, he placed the glow sticks between the stars to complete the constellations.

When he had trouble getting started, I pointed out that the Little Dipper has the North Star (which I had represented with the largest of glow stars from the package). 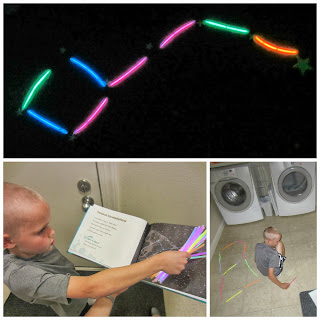 He referred back to Rustad's book often, flipping the lights on to review the number of stars in each constellation. This frequent on-and-off kept the stars charged up and glowing.

Having completed this activity, we'll be reviewing H. A. Rey's Find the Constellations book throughout the remainder of the week.

Posted by Deceptively Educational at 7:49 AM