My son has been bringing home loads of math worksheets quizzing him on arrays. <<YAWN>> After about the third one with a matrix of dots, I thought, "There has got to be a more fun way to practice these."

The epiphany struck when I was folding laundry; The holes on the basket were an array!! Suddenly an idea was born. 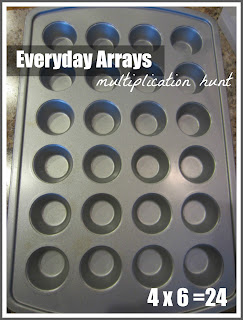 I grabbed the camera and walked the house in search of everyday arrays. Turns out, they're everywhere! I snapped 26 pictures, which I printed out wallet-sized.

Once I cut them out, I calculated the multiplication problem associated with each, stuck a sticky note with the answer to the picture and when they were all "solved," ran around and affixed the sticky notes to the objects throughout the house. 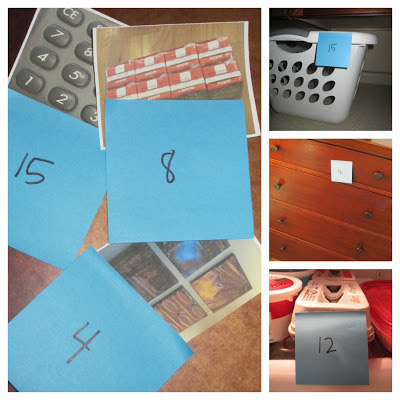 When my son came home from school, he saw the notes everywhere and immediately thought we were doing our math post-it note scavenger hunt. When I told him it was a new kind of hunt, he was bubbling over with excitement.

I handed him a pencil and the stack of pictures. I was stunned when he immediately said, "Arrays!" I asked him to write the answer to these multiplication problems on the back of each picture. He whipped through all the cards with relative ease, only needing help on 7 x 6 and 8 x 8. For those, I gave him a multiplication chart for help.

With the cards in hand, he darted through the house finding the objects in the pictures and comparing the number on the sticky note with his answer. His excitement with each right answer grew, and it wasn't long before his hoots and howls of pride turned into various touchdown dances and even the "Tim Tebow!" 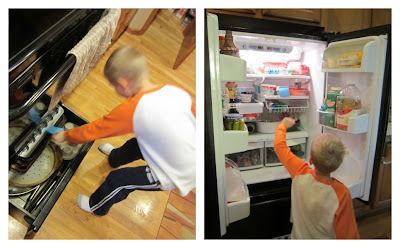 This activity proved that arrays really CAN be fun!

Posted by Deceptively Educational at 7:33 AM

Email ThisBlogThis!Share to TwitterShare to FacebookShare to Pinterest
Labels: Being Active, Multiplication