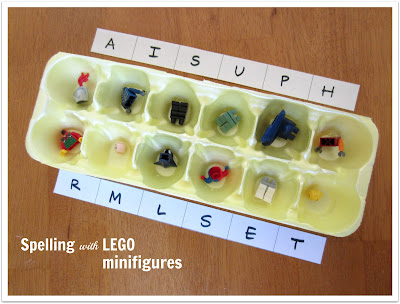 My son has been begging me to create another LEGO activity. Since the last one (our Under Construction Greater Than/Less Than game) was way back in August, I couldn’t say no. With the end-of-the-week spelling test looming, I thought it would be a good time to practice.

To make our “I say it, you spell it” lesson more exciting, I grabbed the drawer from my son’s LEGO organizer with all the minifigures (aka “people parts”).

I made strips for eight words. Now it was time to test his spelling abilities. I told him the word and he wrote it down. 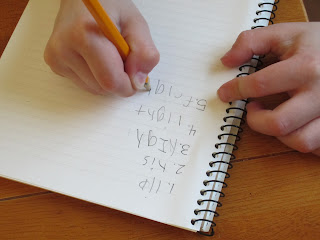 Then he looked for the letters on the strips and grabbed the corresponding LEGO minifigure piece from the egg carton. 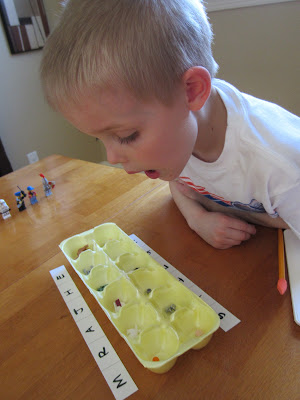 If he spelled the word right, he had the correct body parts to make a figure (e.g. he had the knight’s torso and knights pants, not two heads and a pair of pants). 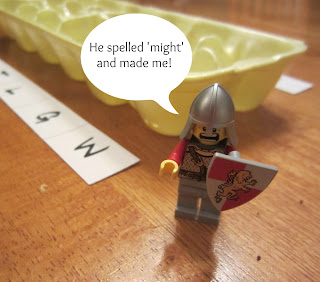 When he was done with this word, I moved the carton out of his view, swapped the strips of paper, and reloaded the egg carton with new minifigure pieces.

This was tons of fun for my son, even though the week’s spelling words were easy for him (he even got the challenge word – frightening – spelled right; it was so many letters long, I had to have him make two figures for that one!).

When the activity was over, there was no grumbling that he still wanted more “playtime” with Mom. After all, he had nine minifigures beckoning!
Posted by Deceptively Educational at 7:45 AM