Me in the Four Seasons 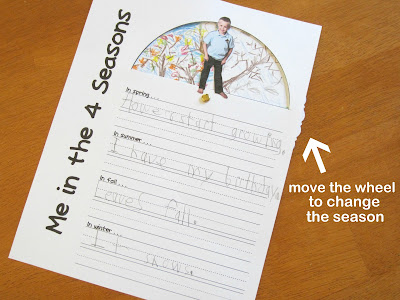 Spring is upon us and what a glorious season it’s already been!

To celebrate the changing of the seasons, I decided it was time to explore why the seasons change with my son.

I relied on Melissa Stewart’s book Why Do the Seasons Change? to help me explain how the tilt of the earth spinning on its axis and its position relative to the sun determined the season.

With this understanding, I started my son on an activity to record what he's observed during the four seasons.

What you need:
Writing sheet and spinner wheel
1 brad
Scissors (we used both fancy scallop-edged scrapbooking scissor and a regular pair)
Pencil
Colored pencils and/or markers
Picture of your child (preferably a full-body shot that’s a little bigger than 3 inches tall)


I gave my son the circle page I created and he used the scrapbooking scissors to cut it out as close to the outer edge as possible. Then I poked a hole in the center with the brad. 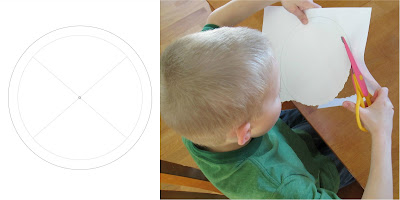 Then I had him fill each quadrant with drawings characteristic of the seasons. The pictures were pretty typical – trees of amber and orange in fall, naked trees and snow in winter, green trees and bright sun in spring – except for his depiction of summer, which was a balloon bouquet (he has a summer birthday). HA! 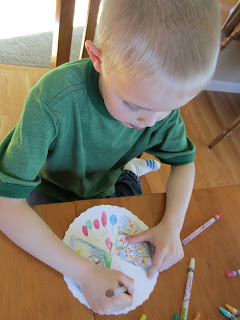 Next, I cut out his photograph, being careful to stay as close to his body as possible. I also cut out the half-circle window on the "Me in the 4 Seasons" worksheet I printed. I poked a hole in this page too, where indicated.

Now, I put two dots of glue (on the head and feet) to attach my son’s picture atop the half-circle window.

My son threaded the brad through the "Me in the 4 Seasons" worksheet and his spinner wheel. The circle is slightly larger, so it sticks out the one side of the page, making it easy to turn. 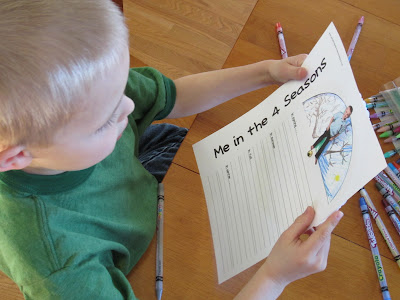 My son was fascinated with spinning it to see the pictures he’d drawn appear behind him!

Before it was time to start making dinner, my son wrote a little about each of the seasons.
Posted by Deceptively Educational at 6:53 AM