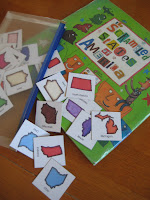 My son kind of digs geography, which I want to encourage. (We have a National Geographic World Map hanging above his bed.) Learning all the states in the U.S. can seem like an impossible task to a five year old – okay, who am I kidding, I don’t even think I could remember all 50?! [blushing with embarrassment]

To make it fun, I created a memory game for him. Since every state has to be represented twice to form a match, I thought it best to divide the game (and states) up by regions.
I made four sets of cards featuring states in each region. Coloring them was a necessity because Wyoming and Colorado are a similar (if not the same) shape. Then, I printed two of each region’s states on cardstock, glued various colors of heavy-duty construction paper to the back of each page (yellow = Plains states, Blue = Northeast, etc.), and cut them out.

When it came time to start our activity, we read Laurie Keller’s book (which I absolutely love), “The Scrambled States of America.” Next we turned the Plains states cards I’d made state-side down, scrambled them up and then arranged them in a nice grid. Each time he turned over two cards to try and find a match, I read the names of the states on the card to him. After awhile, he began to remember their names. I played with him and when one of us got a match, we took an extra turn. 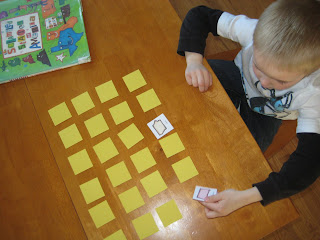 After all the Plains states were matched, he asked to play again. … Of course, I happily obliged.

To make your own scrambled states memory game, click on the regions above to download the states game pieces; remember to print two!
Posted by Deceptively Educational at 6:59 AM