Looking for a quick and easy activity to do during snack time? This is it. 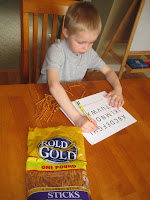 I bought a big bag of stick-shaped pretzels to make trail mix for the kindergarten class’ afternoon snack and had TONS left. Since I always have our son do his after-school educational activities while snacking, I thought using the pretzels to make letters would be fun.
I printed out a page with the entire alphabet in capital letters and asked the question “How many letters can we make out of pretzels?” at the bottom. My son quickly realized that since the pretzels were straight, not every letter could be made.

When he made a letter out of pretzels, he circled it on the page. After he’d gone through the whole alphabet (and nibbled an enormous amount of pretzels along the way), he counted the number of circled letters on the page and wrote the answer to the final question. 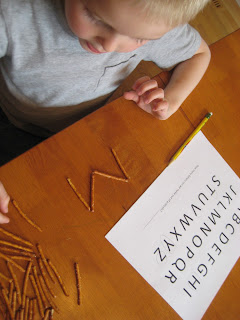 Note: After doing this with my son, I had to relax the “don’t play with your food” rule.
Posted by Deceptively Educational at 9:03 AM