What Gets a Capital Letter? (Board Game) 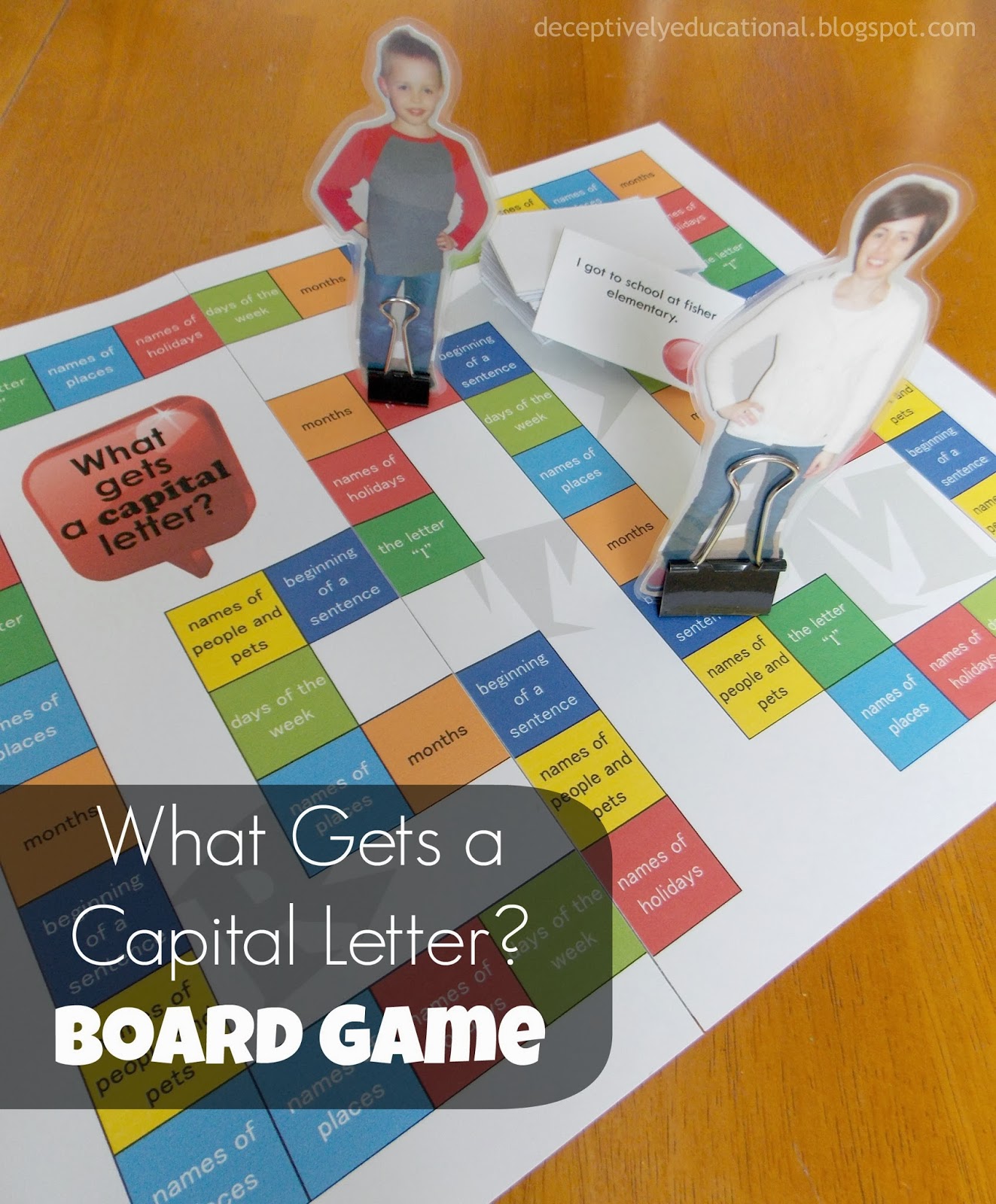 It can be a real struggle to remember what to capitalize when you're eight years old. And since grammar doesn't stick like math does for my son, I wanted to find a fun way to help him learn.

The What Gets a Capital Letter game is a sneaky way to trick kids into remembering that the following are always capitalized:
Days of the Week.
Months.
Names of holidays.
Names of people and pets.
Names of places.
The beginning of a sentence.
The letter "I" when it is a word.

Download a PDF of the game for free on Google Docs here.

It's an easy game with very few rules. Game pieces (we used laminated photos inside binder clips) are placed on the START. The youngest player starts the game by drawing a card from the deck. He/she reads the card and identifies what in the sentence needs to be capitalized and why. Then, the player moves his game piece to the first occurrence of that reason on the game board. 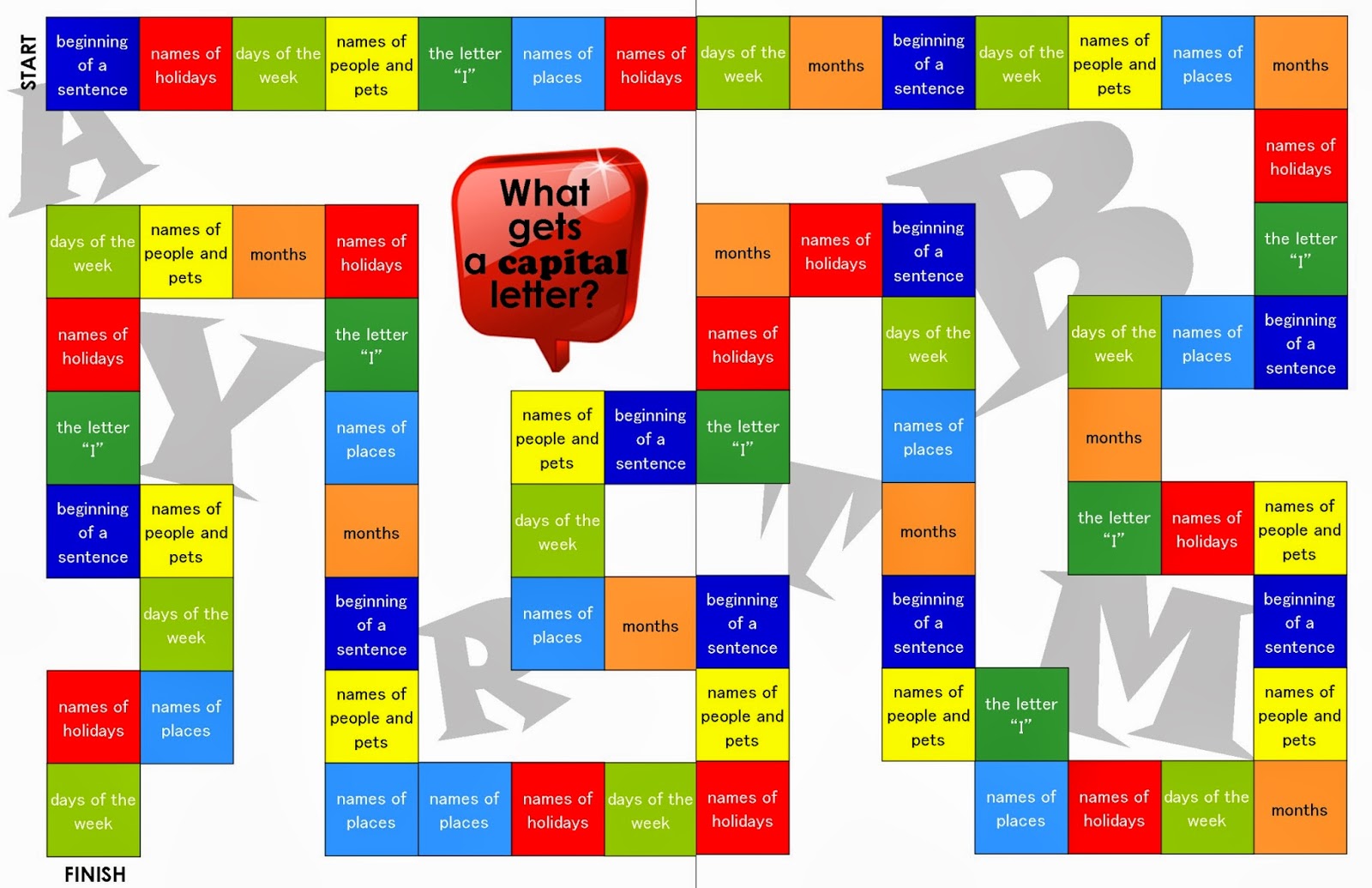 For example, a player might draw the following card:
kiwi fruit is so delicious. 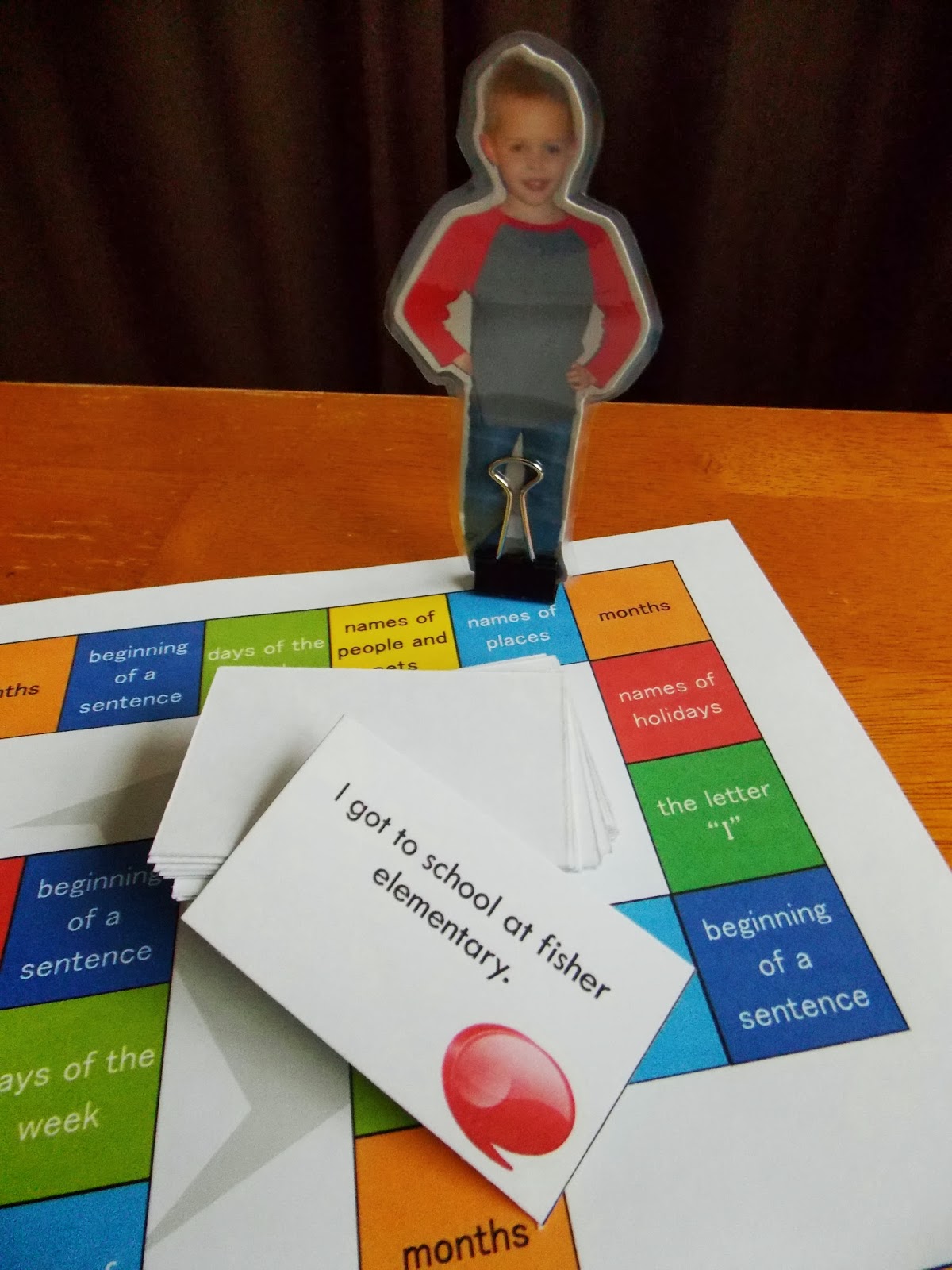 Now it's the opponent's turn. Play alternates between players. 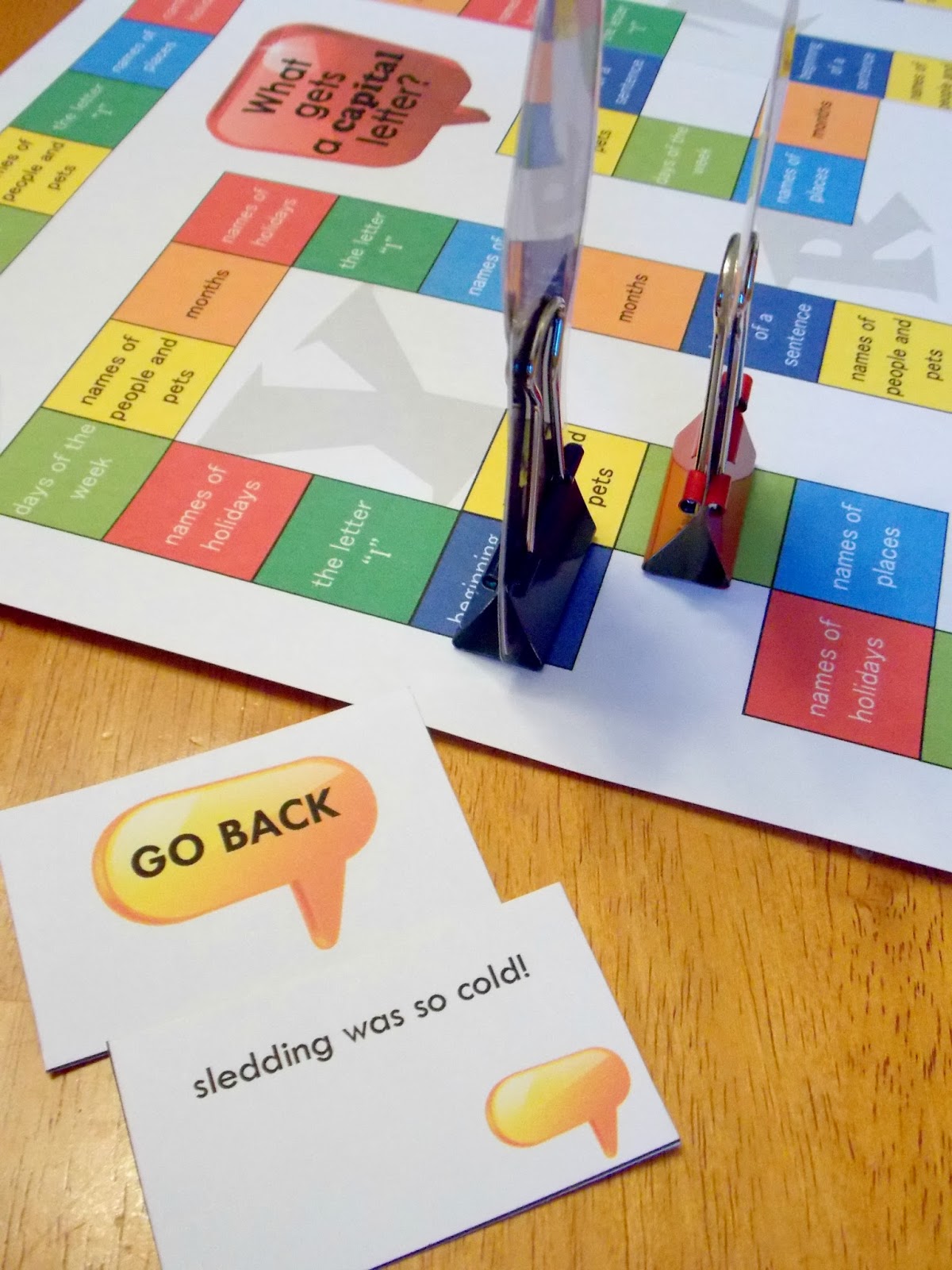 If a player draws a "GO BACK" card, he/she must draw another card and instead of advancing based on the reason for capitalization, they'll retreat. If the player is too close to the start and there's no "months" box, for example, to move back to, their game piece remains in its place.

If players are near the end and draw cards with reasons for capitalization without any remaining boxes, they must still say aloud the correction and reason, but do not advance. The first player to land their game piece on the final "days of the week" box wins the game! 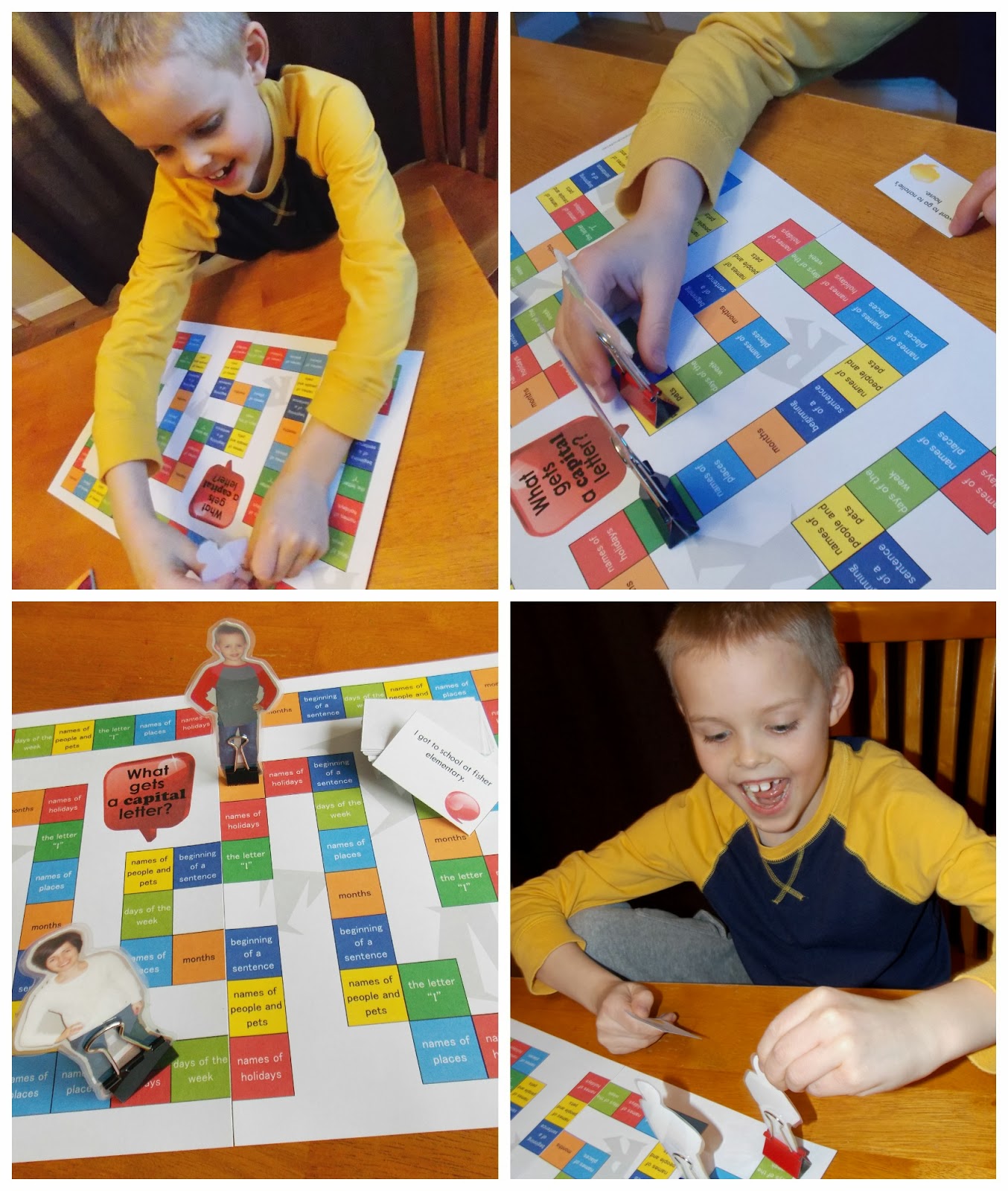 To accompany this game, my son read Kick Ball Capitalization by Michael Ruscoe. It covers many more reasons for capitalization in a very fun way!

Posted by Deceptively Educational at 8:19 AM