My son can add numbers in his head better than I can, but this was still a great way to sneak in some playful math practice.

His little brother got in on the action too (our oldest boy was kind enough to keep score for him).

This wonderful idea came from Spoonful.
The catapult DIY is from Do It And How.

I've been itching to make catapults with my boys for ages but most of the ones I've seen require a block of wood that you attach a clothespin to.

The clothespin isn't the problem; it's buying a big piece of lumber so my husband can saw it into one tiny block. NOT PRACTICAL.

Make a Catapult
This catapult design is uber simple and requires no power tools (unless you consider a hot glue gun one). 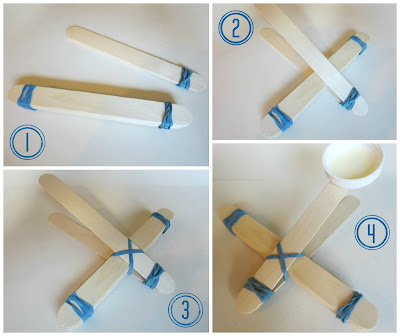 2. Separate the two sticks hinged together with one rubber band and slide the stack in-between.

3. Add the last rubber band by weaving it in and around the point where the sticks meet.

4. Apply a dot of hot glue and attach the plastic cap.

Make it a Math Game!
You'll need something to shoot in the catapult. We used pom pom balls.

Grab four disposal plates and label them with numbers. I used 5, 10, 15, and 20. Use your child's ability to gauge what numbers are appropriate. When playing this with my preschooler by himself, I will just use one plate so he can count by ones how many pom poms hit the target. 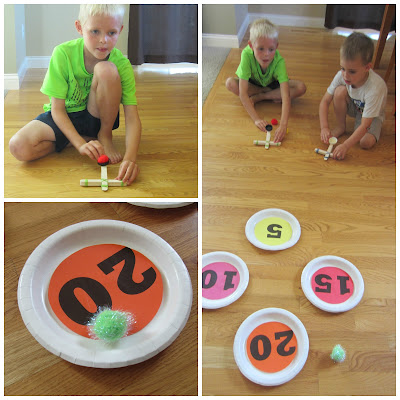 Now lay out the plates and load the catapult with a pom pom. Push down on the pom pom-filled cap, release, and watch it fly! Have kids add their scores together.

Posted by Deceptively Educational at 7:22 AM