Types of Triangles Board Game 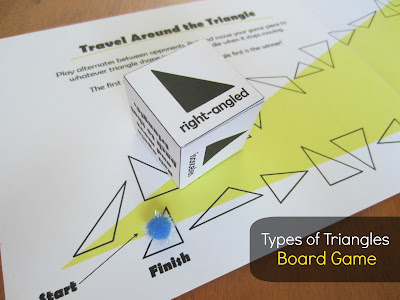 I'm not sure what I was dreaming about or why but when I woke up in the morning I had the idea to make a board game to help my son learn the four types of triangles:
Scalene
Right-angled
Equilateral
Isosceles

Too afraid to forget the idea, I got out of bed, sacrificing sleep for this new activity.

First, I made a cheat sheet to help my son learn the differences between the four types of triangles. 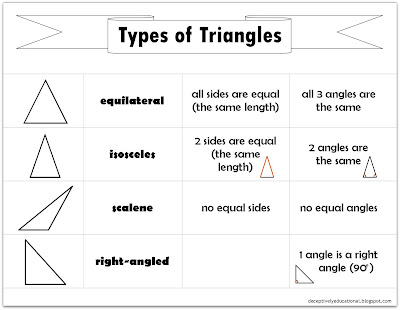 Then I made a template for a cut-and-fold die with the four types and two other commands. 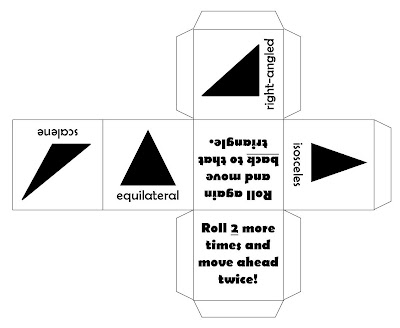 Lastly, I made the Travel Around the Triangle game board.

Download and print the free four-page PDF and make this game yourself. (Remember to print the die on cardstock so it's sturdy enough to be rolled around. And when putting the game board together, the bottoms of the pages will not be aligned; use the triangles as your guide for where to tape the two halves together.)

To help get us in the mood, we read Triangles Around Town, which helped us realize that triangles are practically everywhere!


To play the game, I grabbed two small pom poms to use as game pieces for my son and I. You can use anything small - buttons, magnets, two different coins, etc.

Now, we got rolling. Simply roll the die and move the game piece to the triangle featured. If the top of the die reads "Roll 2 more times and move ahead twice," the player must roll until the die lands on a triangle, move to that triangle on the game board, roll again until another triangle is revealed and move once more.

If a player rolls the "Roll again and move back to that triangle," the same is true. They must keep rolling until a triangle appears on the top of the die when it stops moving. If the player is at the start, the turn is over and their opponent rolls the die. 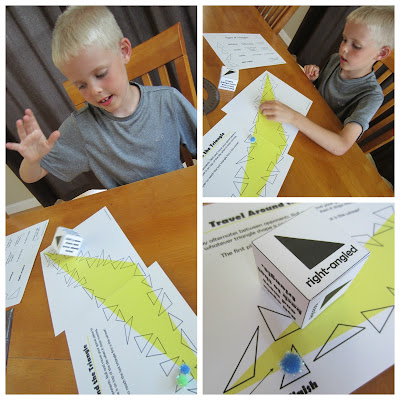 The first player to make it to the right-angled triangle at the finish wins!
Posted by Deceptively Educational at 7:56 AM