There, Their, or They're: You Be the Judge 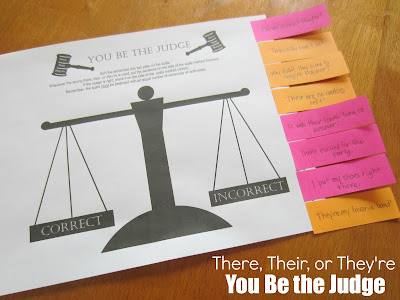 My son got off the bus last week with a long face. He'd failed the pre-test and came home with the easy list of spelling words. I was surprised; he's good at spelling. As soon as he handed me the list, I understood.

There. Their. And they're. That's what had happened.

Not only had his teacher expected him to spell them right, but he needed to know when to use which one in a sentence. My son had totally botched it up.

Those three words sound EXACTLY the same but are used COMPLETELY differently. How confusing!!

To help him study, I gave him a little lesson with some tips and tricks.

There
Within this word is another word: here. There usually represents a place.
Very often, if you can substitute here in place of there, you've used it correctly.

Their
This is a possessive pronoun. I reminded my son that "I" was also a pronoun, which was a hint to help him remember that this their is the only one spelled with an i.
If you can replace their with our and the sentence still makes sense, you've used it correctly.

They're
Among these three words (there, their, and they're), this is the only one that is a contraction. It's an abbreviation for they are.
If you can put they are in place of they're, you used the right word.

Now it was time to put his knowledge to the test.

"You be the judge," I said. "Read the sentences on the post-it notes and decide if the correct there, their, or they're was used." 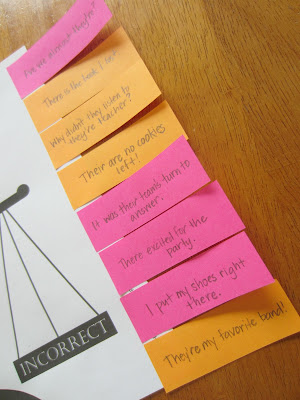 I reminded him that the scale on my DIY worksheet needed to be balanced, so an equal number of sentences should be on the incorrect side as the correct side.


This took LOADS of thought and he referenced the cheat sheet of hints I made several times. I was so proud when he caught two misplaced sentences moments before handing me the worksheet to check. He'd sorted all the sentences correctly! 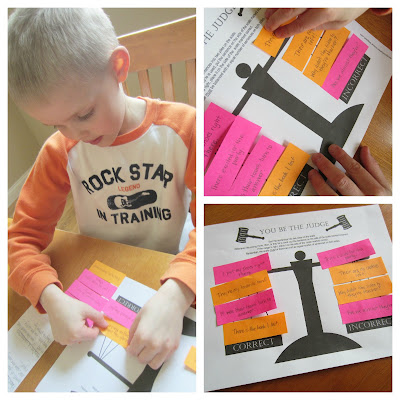 I gave him eight sentences to sort. Here they are, along with some extras we'll be using for future practice:

Correct:
I put my shoes right there.
It was their team's turn to answer.
They're my favorite band!
There is the book I lost.
Their car is blue, not grey.
I asked, but they're out of town that day.
Let's go there.
Their house is the one with the picket fence.
They're too short to ride the roller coaster.

Posted by Deceptively Educational at 7:41 AM