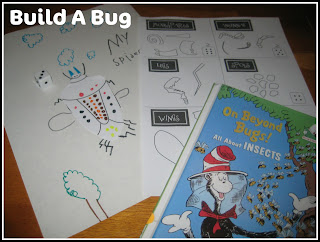 Boys like bugs. This I know is true. When my oldest son was in preschool, I discovered the book Bugtown Boogie at our local library. After renewing it that first time, and checking it multiple times thereafter, I finally broke down and bought it. (I was starting to feel guilty that we were denying other kids the joy of reading this amazing book!)

The story is about a boy who stumbles on a bug’s dance club. It describes a myriad of insects and how they shake it to the buggy-wuggy beat. The book’s rhyming text is lyrical and after a few readings, we started to sing the “chorus.” The book starts:

I was strollin’ on home through the woods the other night,
When I saw something a-flashin’ – it was shinin’ mighty bright!
It was blinkin’ and a-winkin’ near the bottom of the tree,
So I scurried on over just to see what I could see.

To say that Warren Hanson’s masterpiece is one my most favorite children’s books is an understatement. It’s the kind of book you give as a gift, you are glad your child asks you to read over and over, and reminds you how magical the world seemed when you were young.

When I pulled it out to read with this activity, my son was thrilled (he hasn't tired of this book even after two years)! We also read a great non-fiction book from The Cat in the Hat Learning Library – On Beyond Bugs by Tish Rabe. It’s cleverly written and filled with fun facts about all kinds of insects.

After we’d finished reading, I gave my son a die and two pages of bug body parts.

First I had him pick the bug body of his choice, cut it out, and glue it to another piece of paper. Then he rolled the die to determine what he’d add to the picture. If he rolled a three, he could add a leg. I left it up to him whether his creation was an insect or spider (i.e. 6 or 8 legs).

Every time he rolled a four, he added more spots, a two meant he had to keep building his bug’s habitat (first, he added clouds, then a tree – his bug was flying!). He used examples from the sheet I made to help him know what to draw and how many of each (the number of body parts is noted above the die on the ‘parts’ page).

My son’s buggy creation may be the very first winged spider! I love his creativity! 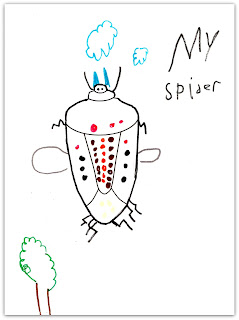 Posted by Deceptively Educational at 7:30 AM