Snappy the Syllable Turtle [Board Game] 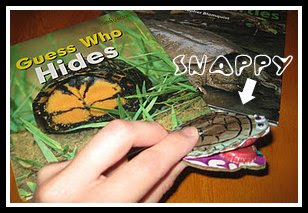 Now that my son has banged out some funky beats on his syllable drum, I thought he’d enjoy playing a syllable board game.

After seeing the most adorable snapping alligators people were making and sharing on the Internet (find one example here), I thought I’d try my hand at making a snapping turtle.

We affectionately named him Snappy.

How to Make a Snapping Syllable Turtle
Salvage some corrugated cardboard from your recycling bin (I used an empty box of diapers). You only need a small piece. Fold it in half and draw a turtle shape with the rear of the turtle shell on the fold. My turtle was nothing more than an oval with a smaller circle peeking out from one end. Cut it out.

Next glue two metal bottle caps on each side of the turtle inside so that when you pinch the turtle together it makes a snapping sound. I used super glue and held the caps in place with rubber bands until the glue had dried. 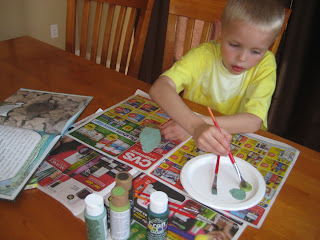 Next, decorate your turtle however you desire. My son painted his in a combination of greens and brown. I used a hair dryer to speed up the drying time and then added some details to the shell with a permanent marker; lastly, my son glued on some googly eyes.

Read
While this activity is really about word work, I wanted to sneak in some science. We read two books to learn about turtles, one of the most interesting amphibians. I read the first book. My son read the second.

Play the Board Game
Download and print the game board (pictured below) and playing cards I made here. 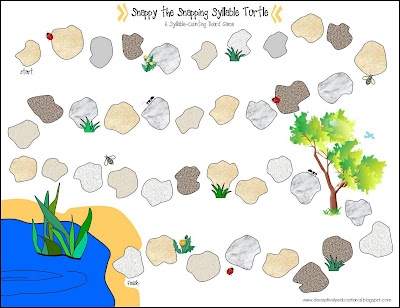 Use something small as chips to move around the board (we used two different colored buttons). This two-player game is easy. Each player draws one card when it’s their turn, reads the word, and uses Snappy to snap the number of syllables in the word. Then they move their chip the same number as the syllables they counted. Play continues until one player finally reaches the finish and successfully helps Snappy return to his home in the lake. 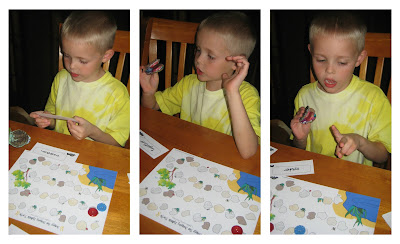 Snapping the syllables with our homemade snapping turtle was so much fun for my son, he often did it for me when it was my turn!
Posted by Deceptively Educational at 7:08 AM