Math is so much more fun when you can eat it. I learned this little lesson when we did Let’s Go Fishing (Snacktime Subtraction) with peanut butter, goldfish crackers, and pretzel sticks. For this activity, I was banking on my son adding (not eating) the marshmallows. It took a little convincing, but when I promised he could eat some after we were done, he was game.

I used three sizes of marshmallows – small, large, and those crazy jumbo-sized ones. The little marshmallows had a value of one, the large ones had a value of ten, and the big honkin’ ones were worth 100. I explained this to my son and gave him an answer sheet with this key at the top. 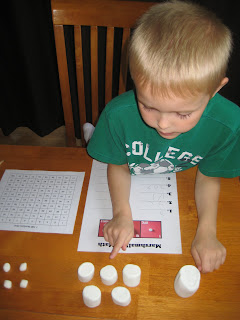 We ran through a number of problems, with answers that ranged from 22 to 955. To wrap up our activity, I put three jumbo marshmallows and two little ones in front of him. I could see him thinking this through before he added three lines and wrote 302. “That’s right! There are no tens so you write a zero in that spot. Great job!”

To reward him for all that hard work, I whipped up some rice krispie treats. What else am I gonna do with all those marshmallows? MMMMmmm. (I’m really starting to like these math activities!)

Want to download the Marshmallow Math answer sheet? A free download is available here.
Posted by Deceptively Educational at 7:04 AM