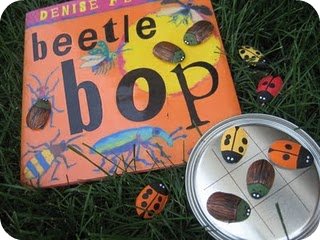 “There’s a bug in the house!” yelled my son as he pointed at the window. Ugh! It was big, too. But luckily, it wasn’t in the house. Unfortunately, though, the insect clinging to our window screen was a Japanese Beetle. (They’ve invaded our neighborhood but, thankfully, our trees, plants, and bushes seem to be holding their own against their insatiable appetite.) The only thing these pests are good for is inspiring a science lesson and craft, so that’s just what I created.

My son and I looked online to find out what we were up against.  We also talked about beetles and learned that while the Japanese Beetle seemed to have no redeeming qualities, the ladybug (also in the beetle family) does.

I read him Denise Fleming’s “Beetle Bop,” a whimsical fiction book whose rhyming text talked about all the different colors and types of beetles. 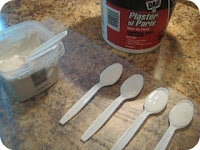 Then it was time to get our craft on. The day before, I had mixed 1 cup of Plaster of Paris powder and water. Then my son and I filled plastic spoons. We tapped the bottom of the spoons on the counter to release any air bubbles and level out the plaster (so we could glue magnets on the back later).

After an hour, the plaster had dried enough to be released from its spoon molds. A full day later, they were completely dry and ready to paint. (Check out Disney’s Family Fun site to see where this idea originated from.) Using acrylic craft paint, we painted five of the plaster shapes like Japanese Beetles and five like ladybugs. Truthfully, we painted a total of 12; my son wanted to keep painting, so we made a few extras too! I used a black Sharpie marker to add some details (e.g. a line down the bugs’ backs between the “wings,” antennae, etc.) and dipped the opposite end of the paint brush in white paint to make dots for eyes. To make the ladybug’s big black dots, we dipped a pencil eraser in black paint. 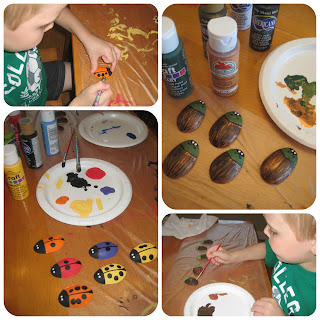 When dry, we attached magnets to the back. I used a black Sharpie permanent marker and ruler to draw a Tic-Tac-Toe board onto a paint can lid. 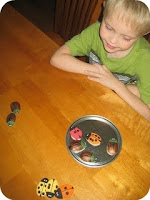 Now, it was time to play Beetle Tic-Tac-Toe … or shamelessly get beat. (If only the real Japanese Beetles in our yard were as easy to beat as I am!)
Posted by Deceptively Educational at 7:06 AM