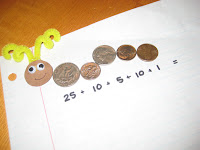 My son just wrapped up a four-week math summer camp and loved it (he clearly has his father’s genes). One of the things his teacher mentioned that he should continue to work on was counting money. Imagine my glee when that very same day Miss Kindergarten shared an amazing activity and printable on counting coins on her blog. (Yes, I do believe in fate.) Her Coin Caterpillars idea was EXACTLY what we needed!

Rather than just hand my son some pocket change and her worksheet, I decided to make some caterpillar faces so we could create caterpillar problems to do now and later.

To make the caterpillar faces: 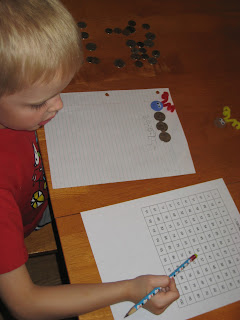 To make his coin caterpillars, I asked him to pick several coins and line them up in a row with a caterpillar face at the beginning. Underneath he wrote the values of the coins and then used a 1-100 numbers grid to count forward (i.e. add the values together).

So cute. So fun. And such good practice. Thank you, Miss Kindergarten!


Find this idea and loads of other great math activities listed on love2learn2day's Math Monday blog hop here.
Posted by Deceptively Educational at 9:01 AM