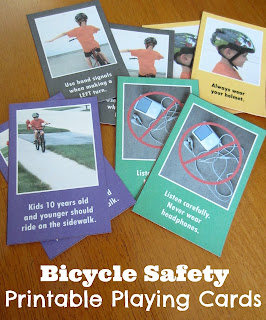 We got our oldest son a new bicycle two weeks ago. Now that he's feeling more confident on his bike, I want to make sure he's being safe.

Rather than rattle off a litany of rules, which I know he'll forget, I made him a set of playing cards.

I come from a bicycling family, so I was able to seek the expertise of my dad for some help. He provides instruction (and free helmets) to kids a few times a year as a member of my hometown's bicycle club. As an avid cyclist, he takes bicycle safety seriously, and as you can imagine, shares my goal of keeping our boys safe on their bikes.

You can download your own set of bicycle safety printable playing cards here.

To make the cards, print the 3-page PDF on white cardstock. If you're concerned the paper is see-through, spray glue some thin colored paper to the back before cutting out. 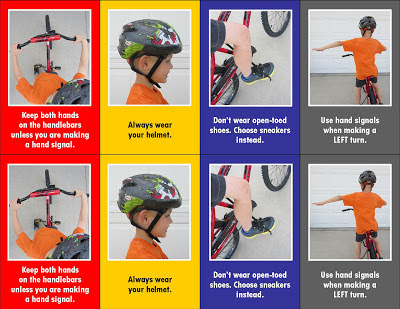 Before we played with our bike safety deck of cards, we read Ride Right by Jill Urban Donahue. This simple books features loads of safety tips - wearing a helmet, only ride during daylight, use hand signals, and be alert (just to name a few)!


Go Bicycling!
With the book done, we shuffled the cards (I printed two sets for our first game). It was time to play "Go Fish" with the two sets of cards. Deal five cards to each player and mix the rest up in the middle between players. Any matches should be removed from players' hands. 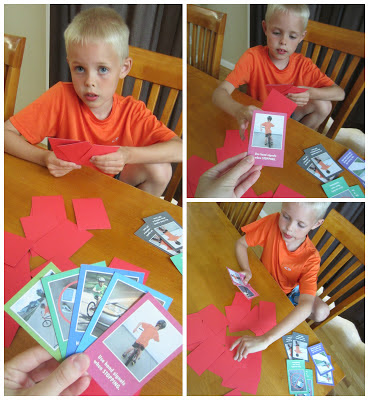 Players can either make a match with two cards or, to make it more challenging, a match can have four like cards. Play alternates between players, with each asking each other for the cards they need to make a match.

"Do you have 'Use hand signals when STOPPING'?"

At which time the player who asked, draws a card from the pile. If the opponent has the card in question, it is surrendered. With the match in hand, the player gets another turn until there are no more requested cards to hand over.

The player with the most matches wins.

Bicycle Safety Memory
With one set of cards (24 cards), players shuffle and lay each out in a grid face down. Players take turns turning over two cards at a time. Like in the Go Bicycling game, when they make a match, pairing two like cards, they get another turn. Cards that are not a match, are flipped back over for the opponent's next turn. 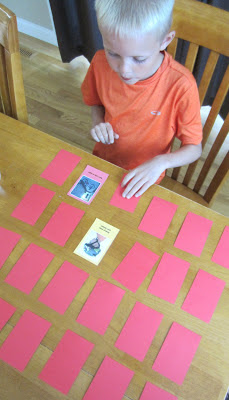 The player to make the most matches wins.

Safe bicycling, everyone!
Posted by Deceptively Educational at 7:51 AM