What can you do with a pack of apple-shaped Post-it notes? Well, you can practice letter recognition, counting, and number recognition with a preschooler, or quiz an older child on their math facts! It's cheap, it's simple, and it's fun. My kind of activity.

I'd love to claim this activity as my own, but truth be told, a friend gave me the inspiration, having used letter magnets to practice upper and lower case letter recognition with her little guy. Thank goodness for smart, creative, like-minded friends who are willing to pass along a good idea!!

Our easel (from Ikea) has a whiteboard on one side and a chalkboard on the other. I took full advantage of both for this activity, drawing an apple tree on each.

Letters (PreK)
The whiteboard tree contained the first seven letters of the alphabet in both upper and lower case. On the apple Post-it notes, I wrote the same letters. It was up to my preschooler to match the letters on the notes with the letters on the tree, strategically placing the Post-its to fill out our apple tree.

Since letter recognition is tough for my little guy, I just had him match the tree's "A" to the "A" note and the "a" on the tree to the "a" note. When he gets better at recognizing letters, I'll have him match upper to lower case. 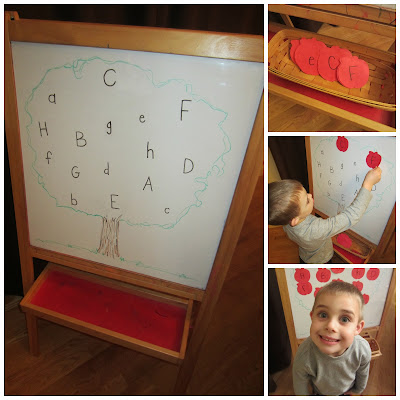 Numbers (PreK & Elementary)
The chalkboard tree contained the numbers 1 through 10. I created two sets of apple Post-its to use. For my oldest boy (3rd grade), I put division problems on 10 notes.

Each problem's answer corresponded to one of the numbers on the tree (e.g. the Post-it said 14 divided by 7, and was placed over top of the numeral 2 on the tree). I used the game cards from our DIY Division 1 Racing game to come up with the problems.

For our four-year old son, I drew dots (aka "seeds") on the apple Post-its. It was up to him to match the number of seeds to the correct numeral. Since number recognition is a new skill, I helped him by giving him clues (e.g. when the answer was 5, I told him the number five looks like a snake). He was so proud of himself! 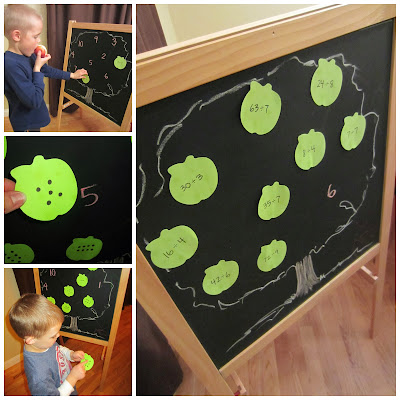 The book I paired with this activity is one of our favorites: Ten Red Apples by Pat Hutchins. It's stylized graphics are quaint and old-fashioned and the repetition is wonderful because my pre-reader can help "read" the book as the farmer exclaims, "Save some for me!" at a whole host of animals picking apples from the apple tree. This piece of children's literature is especially good for kids as they begin to count.

Posted by Deceptively Educational at 7:45 AM